We're sorry but the candle you have selected is currenty in the process of being purchased or has just recently been purchased.

Please feel free to select another candle or check back in 15 minutes to see if the candle you have selected has been released for purchase.

We're sorry but there are no candles available for lighting.

You have already begun a candle purchase session. If you would like to continue with your current candle choice please click "Continue" otherwise please click "Select Another".

In Memory of
Andrew (Drew) & Suzanne (Sue)
DePuydt
2016
Click above to light a memorial candle.

The lighting of a Memorial Candle not only provides a gesture of sympathy and support to the immediate family during their time of need but also provides the gift of extending the Book of Memories for future generations.

In the event that there is an error
in the information presented,
please contact the funeral
home by clicking here. 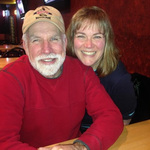 Andrew Charles DePuydt, 65, and Suzanne Marie Tritz DePuydt, 57, passed away on Saturday, October 29, 2016, due to an automobile crash. They died as they lived: together; they wouldn’t have wanted to be apart.
Drew was born December 5, 1950, in Detroit, MI to Bud and Sue DePuydt. He enjoyed many adventures at his family’s cottage growing up with his six siblings. He graduated from Michigan Tech with a degree in Forestry. His work with the Forest Service brought him to Hungry Horse, Montana.
Sue was born July 3, 1959, in Wisconsin Rapids, WI to Ken and Sandy Tritz. The oldest of four children, she enjoyed being the darling daughter amongst her brothers. When she was 10, her family moved to Missoula.
Drew moved to Missoula in 1974, across the street from Sue’s family, where they began dating under strict rules. They fell in love and were married June 10, 1978. Over the next couple of years, they welcomed their two daughters and a son to their family. After a brief period in Michigan, the family returned to Missoula where Drew began his career as a waste water lab technician at Smurfit-Stone Container. After helping their children through school, Sue went back to pursue her dream of becoming a nurse. She graduated from Montana State University with a nursing degree and found her true calling as a neonatal intensive care nurse.
Drew and Sue loved their family and friends and their greatest pleasure came from spending quality time with them. Drew passed on his love of hunting, fishing, and woodworking to his son. He was known for his bear hugs that made anyone who received one feel safe and surrounded in love.
Sue loved sewing, quilting, and knitting. She was also active in the Cursillo movement and enjoyed working Cursillo weekends with her daughter. She and her friends were fierce prayer warriors. Her smile and laugh would light up any room, especially after some tequila or a dirty joke.
Together, Drew and Sue passed along their passion for music, especially the oldies (but goodies) to their children. They also shared a love of Montana, God’s country. Drew was particularly skilled at identifying every type of flora and fauna by their scientific name. Both of these loves were shared at their cabin on Elbow Lake.
Their children were encouraging them to get a new “sister” for their dog, Tequi, to “train her up right.” Drew and Sue’s love for Labrador retrievers was apparent in the many Labs they raised throughout the years as furry members of the family.
They enjoyed their travels to visit their family across the country and were fortunate to explore Ireland with Sue’s mom and their niece. They were looking forward to many more adventures together.
While they had two very different ways of expressing their faith, Drew in the “Church of the Pines” and Sue in the Catholic tradition, they passed their beliefs on to their children and made many dear friends who became family because of their faith.
Sue was always looking for the good in every situation and something to be grateful for. Their family is grateful that Drew and Sue’s corneas were able to be donated to help others.
Drew and Sue were preceded in death by his parents, Bud and Sue DePuydt, and her dad, Ken Tritz. They were also greeted in heaven by their sister-in-law, Cheryl DePuydt.
They are survived by Sue’s mom, Sandy Tritz; their three children: Danielle (Will), Lindsay, and David (Crystal); and their grandchildren: Parker, Miya, Willow, and Ronin. They are also survived by Drew’s six siblings and Sue’s three brothers, along with numerous nieces and nephews, and a large extended family.
The memorial service to celebrate their lives is Monday, November 7, 7 p.m. at Christ the King Parish. Funeral services are Tuesday, November 8, 11 a.m. at Christ the King Parish with Father Jeff Fleming presiding. A reception will follow the service at the Sister Rita Mudd Activity Center.
The family would like to acknowledge the help and support they have received during this difficult time. They ask that you continue to be grateful and find the happiness and joy that surrounds each of us every day. Condolences for the family may be left at gardencityfh.com


To send flowers to the family or plant a tree in memory of Andrew (Drew) & Suzanne (Sue) DePuydt, please visit our Heartfelt Sympathies Store.

This Book of Memories brings those affected by loss together by encouraging communication and self-expression. By giving friends and family a special place to tell their stories and express their feelings of loss, it helps them care for one another during a very difficult time. Click on any of the links to the right to access features or information within this memorial website.