To share your memory on the wall of Aedan Snead, sign in using one of the following options:

Provide comfort for the family of Aedan Snead with a meaningful gesture of sympathy.

Working as a taxidermist at Game Trails Wildlife Studio, he helped populate the trophy walls of others with stunningly lifelike and unique mounts. The work drew on both his deep respect for nature and his artistic sensibilities. With just five years of experience he managed to win top honors in his category and division at the 2019 Montana Taxidermists Association convention, for a whitetail deer mount that he hadn’t even prepared for competition.

Aedan was, at once, a free spirit and a kindhearted friend whose quiet ease made friends and family feel more relaxed and secure when he was around. He never burdened others with any of his own worries, and was always the first to volunteer when help was needed – always with that impish grin creasing his freckles. He learned a tireless work ethic from his father Mark, with whom he spent many long days cutting firewood and tending chickens, cows, pigs and more. From his mother Tisha he learned his deep kindness and generosity towards others.

A celebration of Aedan’s life with reception to follow will be held 2 p.m. Saturday, July 13, at Garden City Funeral Home.

A memorial fund in Aedan’s name has been established at the Park Side Credit Union.
Read Less

We encourage you to share your most beloved memories of Aedan here, so that the family and other loved ones can always see it. You can upload cherished photographs, or share your favorite stories, and can even comment on those shared by others.

Mike and Sande McDonald, All our love, Melissa & Drew, and others have sent flowers to the family of Aedan Thomas Snead.
Show you care by sending flowers

Posted Jul 12, 2019 at 04:50pm
The minute I met Aedan, I was drawn to him. A kind, respectful, gracious young man. We feel lucky to have known him and send our deepest sympathies to his family.
Comment Share
Share via:
OS

Posted Jul 12, 2019 at 12:44pm
Aedan my nephew I'll miss you very much. I'm sorry I only gotten to know you for a short amount of time when you were younger. Hearing and reading about all the amazing things you have done when you grown older, I know you have grown into a wonderful, kind, and talented person. We will all miss you dearly and you will always be in our hearts. Love your aunt Ora.
Comment Share
Share via:
Z

Posted Jul 11, 2019 at 01:58pm
It is with the heaviest of hearts that we leave this tribute. He was a fine young man that was a kind and gentle spirit. So gifted in the areas he loved most, the outdoors and his taxidermy skills. You all are in the many thoughts we have of your family and the absolute deep loss you have all had to bear. Love and prayers🌹Mike and Sande McDonald
Comment Share
Share via:
SR

Posted Jul 11, 2019 at 01:46pm
Wonderful Aedan, the sweet and shy son of Mark. I've known you a long time and watched you grow up. I will miss your sweet smile and seeing you with your dad. Mark, you raised him to be such a handsome, keen, kind and quiet man. Love and peace to you and your family. Susan Roy
Comment Share
Share via:
MM

Posted Jul 11, 2019 at 12:43pm
As you grieve know that we are remembering you and honoring the memory of your kind and wonderful son, Aedan

Mike and Sande McDonald purchased the Tender Tribute for the family of Aedan Snead. Send Flowers 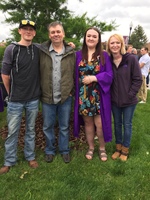