To share your memory on the wall of Albert Adams, sign in using one of the following options:

Provide comfort for the family of Albert Adams with a meaningful gesture of sympathy.

Print
Albert Gotham Adams passed away peacefully surrounded by his family and devoted caregiver at the Family Farm in Frenchtown, MT on Saturday, October 19, 2019.

He was born February 19, 1926 in Hartford, CT to Albert and Marion Adams.Read More
Albert Gotham Adams passed away peacefully surrounded by his family and devoted caregiver at the Family Farm in Frenchtown, MT on Saturday, October 19, 2019.

Dad’s life was a true American success story - he left home at 14 to attend Suffield Academy. To pay for his room and board, he would rise at 4:30am to milk 14 cows for the school’s kitchen. In 1943 Dad joined the Navy and was trained in the Blimps Surveillance Squadron and Parachute Rigger. Like many of the members of the Greatest Generation after WWII, Dad finished high school and attended two years at Syracuse University of Forestry. He then traveled across the country and landed in Crescent City, CA. Out of money, he got a job for the Gasquet Ranger Station of Six Rivers National Forest to man the fire lookout tower on Upper Coon Mountain for 2 summers. He then trained to be the Fire Dispatcher at the main office for the Six Rivers National Forest in Gasquet, CA. It was there that he met his soulmate Marilyn Burrnett. Her family owned and ran a fishing resort on the Smith River. After 2 months of dating they were married in 1952 for 59 wonderful years.
On January 1, 1956 Mom & Dad moved to Great Falls, MT where the construction company Dad worked for had a job for 6 months. Mom & Dad loved Great Falls and got a permanent job with Utility Builders Construction in Great Falls. Dad had great success with Utility Builders and with persistent hard work became their head engineer.
Dad always had a love of horses and in Great Falls he and Mom purchased their first horse - a grey Arabian horse named Abe. Dad became President of the Saddle Club, along with the Masonic Order Scottish Rite and the Algeria Great Falls Shrine Club Bag Pipe Band as a drummer.
After their daughter was born, Dad purchased 2 wonderful American Quarter Horses. The family had great success in the MT Quarter Horse Association competing across Montana and Canada. Dad’s love of horses has always been a constant strong current in his family.
In 1974 Dad went to work for Elk River Concrete Products in Billings as their salesmen for Eastern Montana and Northern Wyoming. His great success as a salesman earned a promotion as President of Elk River Concrete for Montana and Wyoming in Helena in 1981. Dad had the opportunity to work for one of the most successful and caring corporations in the country, and he was very proud of Elk River Concrete. He retired in 1988.
Never to stay idle for long, he and a great friend Ben Mayger became outstanding volunteers for the Helena National Forest restoring old Forest Service Stations, signing the Continental Divide trail and helped to restore the home of the Light House Keeper of the Cape Hatteras Lighthouse in North Carolina. Both Dad and Ben were awarded a special Volunteer Award in Washington, DC.
In Helena, Dad became a member of the Helena Wilderness Riders, made 9 trips into the Bob Marshall, and made lifelong friends.
Through all the years Dad never lost his magnetic personality and charm. When you were a friend of Al Adams, you were a friend for life.
His loving family, Christy Adams Wich, Jack E Wich, and Jacqueline Allie Wich of Frenchtown, Montana hope you can attend a memorial service at The Springs in Missoula, Saturday, November 2 at 3:00pm.
Read Less

We encourage you to share your most beloved memories of Albert here, so that the family and other loved ones can always see it. You can upload cherished photographs, or share your favorite stories, and can even comment on those shared by others.

Posted Nov 01, 2019 at 07:59pm
Christy, We wish you and your family all the best. It is hard losing our parents, no matter how long we have had them in our lives. Much love, 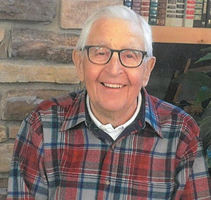