To share your memory on the wall of Andrew Hossle, sign in using one of the following options:

Provide comfort for the family of Andrew Hossle with a meaningful gesture of sympathy.

To send flowers to the family or plant a tree in memory of Andrew Hossle, please visit our Heartfelt Sympathies Store.

Receive notifications about information and event scheduling for Andrew

We encourage you to share your most beloved memories of Andrew here, so that the family and other loved ones can always see it. You can upload cherished photographs, or share your favorite stories, and can even comment on those shared by others.

Posted Dec 11, 2019 at 04:16am
I know that months have passed and this will be seen by no one but there isn't a week that goes by where I don't think about Drew. I'll see someone when I'm at the store and get excited thinking that it's him before it settles in that it couldn't possibly be him. It is a travesty that he was taken from the world so young but he will live on in everyone's heart.
Comment Share
Share via:

Posted Aug 16, 2019 at 01:17am
Drew was a shining light at Porter. My heart goes out to his family , friends and all the kids he helped. Hugs to you Marcy.
Comment Share
Share via:
JO

Posted Aug 12, 2019 at 11:12am
Wishing you peace to bring comfort, courage to face the days ahead and loving memories to forever hold in your hearts.

Posted Aug 10, 2019 at 12:54am
Marcy, you have provided comfort for our family so many times, and helped us through so many difficulties. Alex really admired and enjoyed Drew. We are so sorry for your loss.

Posted Aug 09, 2019 at 09:47pm
My heart goes out to Drew's family. He was an amazing young man and will truly be missed!
Comment Share
Share via: 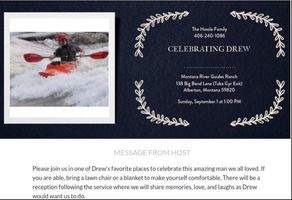