To share your memory on the wall of Daniel Ryan, sign in using one of the following options:

Provide comfort for the family of Daniel Ryan with a meaningful gesture of sympathy.

After graduating from Loyola High School, Daniel joined the Air Force to see the world. He spent four years stationed at Malstrom Air Force Base in Great Falls but did get temporary duty on Guam. He returned to Missoula and worked the green chain at Champion Lumber. They quickly made him the lumber grader. He saw better opportunity as a logger and logged for the next decade or more, until an accident on an icy slope with his chain saw almost cost him his right hand. An auto accident several months later and a long tumble down Rogers Pass crushed his shoulder but did not slow him down. He drove truck and cared for the family's cattle herd. "Pain is my friend," he used to say.

In 1981, by a fluke, he met Karen Walker, when she turned left instead of right. They married in 1983 and were together until his passing, with a bond that was strong. Together, they developed Montana Sprout Farms and supplied all of western Montana, Helena and Butte with alfalfa, radish and bean sprouts for several years and also prepared special sprouts for cancer patients. They lived on the family ranch, which was now headquartered on the north corner of I-90 and Reserve, where Grant Creek Inn is located. In the early 90s, his mother sold that corner and the family moved all their buildings up over the hill, closer to the center of the acreage. Daniel farmed the upper pastures, raised sheep and began selling lamb at the newly formed Clark Fork River Market. He was the anchor of that new market and supplied tables and chairs every Saturday, as well as misters to counter the summer heat. His lamb wagon held a cooler and freezer and he and Karen greatly enjoyed the interesting people they met there. Daniel was known for gifting sheep rugs to any young female farmer who recently gave birth. He always thought there was nothing finer for a newborn than lying on a soft sheep rug.

The family ranch sold in 2009 and Daniel and Karen moved to Round Butte, west of Ronan, where they continued to raise sheep and alfalfa, until his passing. The upper pastures of the old ranch are now in conservation trust through Five Valleys Land Trust.

Many young people were mentored by Daniel. He particularly enjoyed teaching his farm and ranch skills to younger people from more urban backgrounds. Everyone benefited from his wisdom and wit. He was extremely generous with his time and expertise. He always worked hard to erradicate noxious weeds. That was one of the reasons he switched from cattle to sheep on the North Hills.

He ran payroll in western Montana for the 2000 census, served on the Montana Wool Growers Board, the Missoula Weed Board and was president of the Western Montana Sheep Growers Association. He was extremely well read, enjoyed watching politics (MSNBC) and was usually entertaining and interesting to be around. Laughter always guaranteed. He thought outside the box.

He is survived by his wife, Karen, their son Paul Walker Ryan and daughter- in -law Echo Ryan, as well
as Dan (Teri), Elizabeth and Tay Erin (Silas) from his first marriage to Joy O'Hara as well as several grandchildren and one great grandchild and two brothers, Tom and Pat. His other brother, Mike, died as a young man.

A celebration of Daniel's life will be held on the longest day of the year, June 20, at Rowdy's on North Reserve in Missoula, gathering at 11 a.m.
Read Less

We encourage you to share your most beloved memories of Daniel here, so that the family and other loved ones can always see it. You can upload cherished photographs, or share your favorite stories, and can even comment on those shared by others. 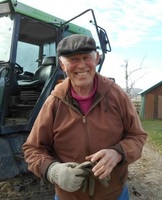