To share your memory on the wall of Della Ringle Bozman, sign in using one of the following options:

During her growing up years she was active in the Salvation Army, playing in the brass band, teaching Sunday School classes, and doing whatever was needed.

Della married Raymond Fisher Bozman on December 27, 1944, in Riverside. Soon thereafter, Ray was sent to the South Pacific theater: the Dutch East Indies, the southern Philippines, and Manila. During that time Della lived in Riverside working at March Airforce Base. When Ray returned, the chose to stay and continue their education at Riverside Junior College.

Their first child, Thomas Raymond, was prematurely born on March 16, 1947. He lived only long enough for the doctor to declare his birth and death.

In September 1947, they entered the Salvation Army’s Officer Training College in San Francisco, CA. Della was again pregnant. Sharon Rose was born on February 26. 1948, while they were cadets, at the Salvation Army’s Booth Memorial Hospital in Oakland, CA. In June 1948, they were commissioned as Lieutenants and sent to their first assignment in San Pedro, CA. They were there for two and one-half years. Their second daughter, Candace Anne, was born on October 3, 1949. In January 1951, they were reassigned to Compton, CA for one year, then transferred to Bremerton, WA. They served the Salvation Army Corps for five years. During this time Valorie Jeanne was born on May 20, 1952 and Eden Rae, born on October 26, 1955.

While Eden was just an infant, they transferred to Helena, MT. Montana is “Big Sky” and “Wild West” country. The Salvation Army building was on the main street, “Last Chance Gulch”. The winter temperatures sometimes drop to 40 degrees below zero. They loved it! When Ray’s health problems forced them to resign as Officers, they chose to remain in Helen to be near the VA Medical Center at Fort Harrison, MT.

In addition to her homemaking responsibilities, Della worked several jobs: House Mother at the Florence Crittendon Home for Unwed Mothers; Secretary/Bookkeeper for Ray’s Real Estate business; and Secretary to the Chief of Surgery at the VA Medical Center at Fort Harrison. Following retirement from the VA, Della worked as bookkeeper and receptionist at the Helena Salvation Army Corps. She and Ray lived in Helena and were active soldiers (members) of The Salvation Army. Following Ray’s death in 1989, Della accepted a commission as the Sergeant-Major of the Helena Corps. She held this commission between 1989-2003. Della served her community in many ways following her second retirement. She was secretary to the local Church Women United group, the C.R. Anderson PTA, the National Association of Retired Federal Employees, The Salvation Army Advisory Board, and The Salvation Army Northwest Division’s Divisional and Locals Council. She served as an Adult Bible teacher and treasurer for her local Salvation Army Women’s Ministry group and played the piano for services and group meetings.

Della travelled to England as a delegate to the World Wide Conference of The Salvation Army in 2006. She later travelled with her brother and sister-in-law to Costa Rica to visit the Salvation Army Officer Training School near the capital of San Jose. She has visited England, Belgium, the Netherlands, Germany, France, Spain, and New Zealand.

At the age of 80 years, she moved from Helena, MT to Bismarck, ND, to be near to her youngest daughter Eden. She once again became active in the local Salvation Army Corps, accepting the commission of Corps Sergeant-Major and leader of the Women’s Ministries program. She taught the Adult Bible Class and played piano as needed. She expressed her thankfulness to the Lord for allowing her to serve Him in so many ways throughout her lifetime.

In 2013 Della moved to Missoula, MT to be near daughters Sharon and Candace. She attended the Missoula Corps until her health made it difficult to be there in person.

Della loved God, her family, and served others selflessly. Her life was a victorious one, and for this her family is thankful. She is survived by her four daughters, ten grandchildren, and 15 great-grandchildren. She was preceded in death by her loving husband, Raymond Bozman, her firstborn son, Thomas, and her grandson Rodrigo DeAlvarado.

Her funeral will be at 10:00 a.m. Wednesday, September 16, 2020 at Garden City Funeral Home in Missoula. Captain Josh Boyd will officiate. Visitation will be one hour prior to the service. Burial will then be at 3:00 p.m. Wednesday at Montana State Veterans Cemetery at Fort Harrison in Helena.

Arrangements are under the care of Garden City Funeral Home in Missoula.

To send flowers to the family or plant a tree in memory of Della Louise Ringle Bozman, please visit our Heartfelt Sympathies Store.

Receive notifications about information and event scheduling for Della

There are no events scheduled. You can still show your support by sending flowers directly to the family, or planting a memorial tree in memory of Della Louise Ringle Bozman.
Visit the Heartfelt Sympathies Store

We encourage you to share your most beloved memories of Della here, so that the family and other loved ones can always see it. You can upload cherished photographs, or share your favorite stories, and can even comment on those shared by others.

Posted Sep 18, 2020 at 11:22am
Sharon, I'm glad you and your sisters were able to enjoy your mother for so long. What a life she lived.
Ralph Beer
Comment Share
Share via:
MR

Posted Sep 16, 2020 at 01:08pm
What a life Della lived! I had no idea! I have memories of her as such a nice person the many times I was in her home on Cannon St. with my friend from junior high Valorie.
Comment Share
Share via:
KC

Posted Sep 16, 2020 at 11:29am
In honor of my Aunt Della, who is my second mother. This small gesture recognizes your selflessness to your family and all who knew you. Kala

Nancy and the TVG gang.

Posted Sep 16, 2020 at 10:40am
Cedar, we are thinking of you. We hope that your grandmother's memory lives on in the breezes and branches of this tree for generations to come! xo 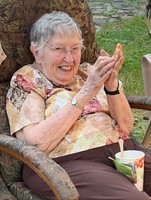