To share your memory on the wall of Donald Shaughnessy, sign in using one of the following options:

Provide comfort for the family of Donald Shaughnessy with a meaningful gesture of sympathy.

Print
Donald Joseph Shaughnessy, Sr., 87, of Missoula, MT passed peacefully to the Lord on December 4, 2019 with his loving wife of 63 years, Mary, at his side.

Born in 1932 in Chicago, Illinois to Margaret and Emmett Shaughnessy, Don’s form... Read More
Donald Joseph Shaughnessy, Sr., 87, of Missoula, MT passed peacefully to the Lord on December 4, 2019 with his loving wife of 63 years, Mary, at his side.

Born in 1932 in Chicago, Illinois to Margaret and Emmett Shaughnessy, Don’s formative years were spent singing with Chicago’s Paulist Choir, under the directorship of Fr. Eugene O’Malley. He graduated from Saint Ignatius College Prep, Loyola University of Chicago, and he earned an MBA from the University of Chicago. On February 11, 1956, Don married the love of his life, Mary Ann Wall.

After serving in the Army, Don began his 25-year career with the Armour/Dial corporation. Never one to rest on his achievements, Don resigned from Armour/Dial as the president of the corporation. As his next challenge, Don and Mary purchased Sawtooth Beverage, in Ketchum, Idaho. Moving into retirement, Don and Mary traveled the world while volunteering for the International Executive Service Corps. Among his many business accomplishments, Don maintained true and lasting friendships throughout his lifetime.

Don continually sought to give back to others. He was dedicated to the community wherever he lived. He served on the board of the Phoenix Symphony, Marcus Daly Memorial Hospital, and Project Headstart. He was part of many church councils and in more recent years, he was affiliated with the Business School at the University of Montana. Don always shared his time and knowledge with others. He gave much of himself in everything he did.

He will be remembered as a wonderful, honest man who loved his family greatly and loved life immensely. He knew how to savor the goodness out of life, big and small. Particular passions were cross country skiing, camping, traveling and cycling. Oh, how he loved his bike! He competed and won many gold, silver and bronze medals in the Senior Olympics for cycling.

Don leaves behind a beautiful legacy of love for his family: Donald Jr., and daughters Mary (Luis), Molly, Maggie (Randy). Don is also survived by many loving grandchildren, great-grandchildren and extended family. He is preceded in death by his son Joseph.

Patti and I are so sorry for your loss. We remember fondly dinners at your Carefree home and the good times we had---both business and social. As you'll recall, I worked for Foote, Cone & Belding and moved to Phoenix when the Armour-Dial team relocated there. Don was a kind and caring person and a strong leader for Armour-Dial. 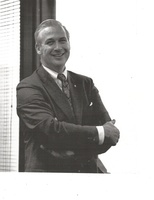