To share your memory on the wall of Donna Chambers, sign in using one of the following options:

Provide comfort for the family of Donna Chambers with a meaningful gesture of sympathy.

Print
Donna May Chambers, 73, of Superior passed away peacefully at home surrounded by family on August 19, 2019.

Donna was born on March 12, 1946 in Missoula, Montana to Lauren and Lillian Christopher. She was born the fourth of seven child... Read More
Donna May Chambers, 73, of Superior passed away peacefully at home surrounded by family on August 19, 2019.

Donna was born on March 12, 1946 in Missoula, Montana to Lauren and Lillian Christopher. She was born the fourth of seven children, making her the middle child. Perhaps this contributed to her lifelong role of peacekeeper. As a young girl she grew up on her family's ranch outside Arlee, Montana. Later in her youth the Christopher family moved into town to run and live in the Jocko Valley Store. Donna always recalled her youth fondly and particularly loved when the kids would all ride in the back of Lauren’s truck and take a drive, always stopping for a picnic that Lillian had prepared. Donna inherited Lauren’s love of ice cream and sweets which she retained throughout life, much to her grandchildren’s delight. The Christopher siblings have remained close uniting for frequent gatherings and Christmas parties. Donna graduated from Arlee High School in 1964 as valedictorian of her class. She continued her studies at the University of Montana where she earned a degree in Education.

On September 17, 1966, she married Gary Chambers in Missoula. For the first years of their marriage they lived around the state of Montana in various cities while Gary was working construction building bridges. In 1969, their son Guy was born while they were living in Terry. In 1971, they welcomed daughter Laurel in Butte where Gary had begun his career with the Fish and Game as a Warden. After Laurel was born they chose the town of Superior Montana and made it their hometown. They built a house with a beautiful river view along the banks of the Clark Fork River at the mouth of Dry Creek to raise their family in. In 1982, more than a few years later, the baby of the family Libby arrived. Donna always said having a young daughter kept her feeling young. She also found humor in having her three children born in three different decades. The Chambers family opened their doors to many exchange students and teachers. One of those students, Lutz Paikert, became like a son to Donna and Gary. She always greatly enjoyed his return visits.

Donna’s legacy is her nearly 50 year teaching career which began in Troy, Montana in 1968. By 1972, Donna found herself teaching in the first school-organized Kindergarten program in the basement of the Trinity Lutheran Church in Superior. An expert in the field of elementary education, Donna earned many accolades throughout her teaching career at Superior Elementary School but it was Donna’s love for children that set her apart. She had a knack for knowing how to make each child feel special. She also always noticed and quietly helped children who needed a little extra love and assistance. Donna ‘officially’ retired from teaching in 2006 but was far from done working as she continued to serve as a volunteer teacher/mentor at the school. During that time she was integral in the creation of a Superior School District preschool program many years before peers statewide. She re-retired in 2014, but continued to volunteer and work at the school and then retired yet again in 2016. In her spare time over the past two decades, Donna also served as the District’s Missoula Children’s Theatre Coordinator as well as the Foster Grandparent Program Director. After her 3rd or maybe 4th retirement from the Superior School District she worked for the State of Montana for her niece Jill, whom she has always adored. This work was extremely fulfilling for Donna as it included both her love of preschool and mentoring teachers.

Donna loved to travel and went on numerous vacations with family and friends. She had an adventurous spirit preferring educational travel opportunities to leisure vacations and bunking in dormitories with other teachers over 5 star accomodations. Her favorite excursions were with the National Geographic Alliance of which she had been a member since 1994. Her travels took her across the globe including a summer spent teaching in Australia. Everywhere Donna traveled she turned strangers into friends. On a trip to Mexico for her daughter’s wedding she made friends with a couple in the lobby during check in and by the end of the week they were toasting as guests at the wedding.

Donna found great enjoyment in nature, taking frequent hikes with family and friends. She loved gardening, birdwatching, tending her raspberry patch, huckleberry picking, hummingbirds, daffodils and finding the spring’s first buttercup. She loved live theater and was an avid patron of the Missoula Community Theater. She never missed attending opening weekend of every play with her friends and sister Allison. Donna maintained an active social calendar and was a member of the local Quilt Guild, and pinochle and bridge clubs. Donna cherished her all friends and enjoyed just visiting over a cup of tea or craft project. Donna once told her children she hoped they had a career that they enjoyed as much as she did teaching, but we hope we craft a circle of friends as wonderful as hers.

Donna’s biggest joy and delight in life came from being a Grandma. Her grandchildren would all say she was the best Grandma ever. All Donna’s friends and family would agree. She was their biggest champion and fan attending every event possible. She loved watching them participate and to her they were always the star no matter their performance or final score. She was always up for a sleepover, tea party on the fancy china, reading a story, playing a game, going to the river, or going on an adventure with them. The word ‘no’ didn’t have much of a place in Grandma Donna’s house. She always had a story about her grandkids and pictures to share.

Donna was preceded in death by parents, Lauren and Lillian Christopher and brother George Christopher.

The family would like to express their gratitude to the Superior community for all their love and support during Donna’s last months. Thank you friends for all the phone calls, meals, huckleberry milkshakes, visits, and assistance with craft and quilting projects. You brought her laughter and love in her last few months and it means the world to us. Special thanks to the hospice staff with Partner’s in Home care. Because of your care Donna was able to spend her final time with her children and grandkids at home enjoying her beautiful river view.

Memorial Services are scheduled at 11 a.m. on September 2nd in the Superior High School Gym with a luncheon to follow.

Donations may be made to the Donna Chambers Memorial Fund at Trails West Bank - for the direct benefit of teachers and underprivileged students in the community.
Read Less

To send flowers in memory of Donna May Chambers, please visit our Heartfelt Sympathies Store.

We encourage you to share your most beloved memories of Donna here, so that the family and other loved ones can always see it. You can upload cherished photographs, or share your favorite stories, and can even comment on those shared by others.

Posted Aug 27, 2019 at 11:13am
Thank you to the Chambers family for the loan of Donna to Superior Schools over nearly five decades. I am exceptionally blessed to be a member of Donna’s first class of kindergartners in 1972, and I am proud to have become her colleague in 2007 when I was recruited to return to my hometown to serve as her principal. There is no part of our school community that does not bear witness to Donna’s gentle grace and compassion. Her work as a teacher, mentor, advocate, leader, and colleague epitomizes the selfless nature of genuinely outstanding teachers and the way they serve others. Her character, voice, vision, and indefatigable optimism will be sorely missed as she elevated our collective craft to art. I loved Donna as my teacher so very long ago and have continued to love her every day since. Scott Kinney - Superintendent of Superior Schools
Comment Share
Share via:

Posted Aug 27, 2019 at 11:01am
When I think of Donna, one word comes to mind, compassion. Donna had a heart of gold for all who were lucky enough to have known her. She was my mentor, colleague, and friend. Donna found a place in her heart for every student she taught, and made them all feel special. When I first started teaching, Donna was always there to listen, lend a helping hand, and give me much valued advice. She was always there in one way or another throughout my teaching career. I feel blessed to have known her and will never forget her.
Comment Share
Share via: 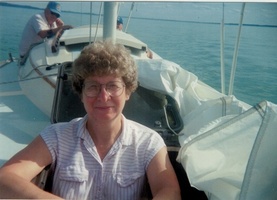