To share your memory on the wall of Elizabeth Verlanic, sign in using one of the following options:

Provide comfort for the family of Elizabeth Verlanic with a meaningful gesture of sympathy.

Betty was born Feb. 3, 1933 to William and Margaret Anderson in Anaconda, Montana and graduated from Anaconda Central High in 19... Read More
Missoula, Mt.—Elizabeth “Betty” Verlanic, passed away on Aug. 30, 2019, of natural causes. She was 86.

Betty was born Feb. 3, 1933 to William and Margaret Anderson in Anaconda, Montana and graduated from Anaconda Central High in 1950.

Betty married Orville Verlanic on June 24, 1950 and they were married for 63 years.

Betty raised 7 children, cooked and took care of the whole family. She was the very “best,” mom a family could have. She moved with Orville during his railroad career making many friends in Anaconda, Livingston, Missoula and Laurel.

Betty was a sports fan and closely followed her children and grandchildren in all sports. She most recently attended grandson Jon’s football games at UM-Western, and her great-granddaughter Addie’s basketball and softball games. She rooted for Notre Dame, the Grizzlies, the Bobcats, and the Lady Griz, but especially any team where a child, grandchild or other relative or friend was playing.

Betty was a great cook and baker. Cooking was her passion. She lived to bake and cook good food. The family had delicious meals and treats every day, and once the kids were grown, she worked as a cook at a number of restaurants and St. Patrick’s Hospital. Her son Jim coined the phrase, often repeated by many, “Mom, that was the best you ever made!” Which was true—every time! In the 2 days before she got sick, she helped her daughters Mary and Gail, prepare over 50 jars of huckleberry and raspberry jam. And the morning before she went into the hospital she made two beautiful peach pies. And they were the best she ever made.

After her husband passed away, she moved into the Clark Fork Riverside Manor, making many new friends, playing cards and games, and was manor’s champion “Wii” bowler. Her schedule of activities, visiting friends, and going out to eat made her busier than ever—and she “loved,” her independence.

Betty was also a natural teacher and volunteered tutoring students in reading and math at Russell, Lewis and Clark, and Target Range schools.

She kept in touch with friends and relatives in Anaconda, attending class reunions, and a few weeks ago was at the Verlanic family “cousin-fest,” in Anaconda.

Betty was preceded in death by her parents, husband Orville, sister Eleanor, her daughter Joanne, and half-brother Tom Anderson.

A Catholic Rosary for Betty will take place at 7 p.m. on Thursday, Sept. 5, 2019 at St. Anthony’s Catholic Church, 217 Tremont in Missoula and everyone is welcome to attend to meet the family.

A Mass of the Resurrection will at 11 a.m. on Friday, Sept. 6, 2019 at St. Anthony’s Catholic Church, 217 Tremont, in Missoula. After mass there will be a reception and luncheon in the parish hall.

Interment will take place at St. Mary’s Catholic Cemetery in Missoula following the mass and reception.

Please dedicate memorials to the St. Jude’s Children’s hospital, or the St. Anthony’s Parish, or a charity of your choice.
Read Less

We encourage you to share your most beloved memories of Elizabeth here, so that the family and other loved ones can always see it. You can upload cherished photographs, or share your favorite stories, and can even comment on those shared by others.

Posted Sep 05, 2019 at 01:51pm
My sincerest condolences on the passing of your mother. She was a very special woman, and she will be missed by many. I have many wonderful memories of your mom and dad while working with them, and I so enjoyed our friendship over the years. Sending prayers to your family.
Barbara Lambrecht, Duluth, Minnesota
Comment Share
Share via: 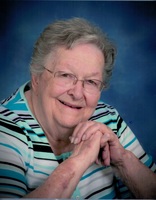