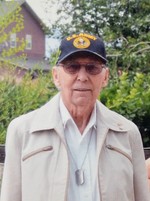 Elmer Hoch of Missoula, MT and former long-time resident of Wolf Point, MT passed away Saturday March 28, 2020 at the age of 93.
Elmer was born December 19th, 1926 to August and Hulda Hoch, who for many years, farmed north of Wolf Point, Montana. He attended Star and Wolf Point schools. He was drafted into the Army in 1945, serving in Korea from 1945-1946. Elmer was honorably discharged in December 1946 as a Technical sSergeant.
Elmer Married Eldora Good on May 6th, 1951 in Wolf Point, MT. Eldora passed away on November 4th, 2006 after 55 years of marriage to Elmer.
He was employed by Chevrolet Garage, Roosevelt County, Bergen Construction, and the U.S. Postal Service. Elmer Founded Hoch Excavating in the 1960’s and continued to operate the business for 30 years. Later in life Elmer worked seasonally at the Western Montana Fairgrounds in Missoula and his handy work remains evident in a multitude of improvements and repairs he made to the facility.
Elmer served on the board of the Community Bible Church. His hobbies included camping, fishing, hunting, and bowling. His love of bowling led him to sponsor a bowling team for several years.
He is survived by his son Loran Hoch of Rapid City, SD; daughters Charlene MacDonald of Caldwell, ID and Cindy Hoch of Boise, ID; grandson Sheldon Hoch of Rapid City, SD; granddaughters; Jennifer Bowman of Missoula, MT and Andrea Evans of Star, ID. He is also survived by his sisters Esther Anderson of Wolf Point, MT and Evelyn Knight of Rapid City, SD.
Elmer was preceded in death by his wife Eldora; parents August and Hulda; stepmother Ida; sisters Ella Krahn and Elsie Bergen; brothers Emil, Elias, Elvern, Eddie, and Ervin Hoch.