To share your memory on the wall of Fred Nelson , sign in using one of the following options:

Fred was born November 28, 1928 at Kalispell, Montana to Raymond Nelson and Martha O’Brien Nelson; he and his sister Evelyn attended grade school at Kalispell. At the time of their mother’s death in 1940, the family moved to Polson and then to Anaconda where he attended junior high and high school, graduating from Anaconda High in 1947.

Following high school, he worked at the Anaconda Company Smelter and later, for the BA&P (Butte Anaconda Pacific) Railroad and, being an excellent trumpet player, played numerous dance jobs throughout the area. Following his lifelong passion for music, he enrolled at the University of Montana in 1948 where he received a Bachelor of Arts degree in music. During his earlier musical foray in high school, he noticed the piano player in the dance band, a pretty Anaconda girl named Marlene Murray. They were married on St. Patrick’s Day 1951 at St. Paul Lutheran Church in Missoula; this loving relationship would last for 61 years until her death in 2012.
They remained in Missoula where Fred finished his degree and worked part-time for the Montgomery Ward company. He also had a dance band (The Moon Moods) that was well known throughout the Missoula area; Fred and the band’s drummer Mel Rice would remain lifelong friends.

He served in the U.S. Army, serving stateside and overseas in Japan with the post-WWII occupational forces. Following his discharge from active duty in 1954, he accepted his first teaching job as band director at Polson Public Schools. During this time, he also earned his Masters Degree from U of M.
He came to Libby in 1957, accepting the position as director of bands and music department supervisor for Libby Public Schools. He remained there during a period of student growth years with baby boomers and the influx from Libby Dam construction. During this time, Libby became a AA school with student participation in music growing from 50 to nearly 500 students.

In the fall of 1971 he returned to Missoula, accepting the position as director of bands at Sentinel High School, continuing his passion for teaching music until retiring in June of 1987. He remained in Missoula where he was employed by Morgenroth Music Center as a sales representative throughout western Montana. He stayed actively involved in music education as guest conductor and adjudicator at many music festivals throughout the area and, for many years, as a private music teacher. He and Marlene enjoyed traveling both here and abroad during this time, much of it with good friends Mel and Charlotte Rice.

In the later 1980’s Fred, along with several other alumni of the UM School of Fine Arts, founded the U of M Alumni Band which remains a very large part of every homecoming celebration.

In November of 2013, he married Karina Hatch; they enjoyed dancing, traveling and many other adventures until her death in October of 2016. During his later years, he enjoyed residing at Grizzly Peak and the wonderful friendships he had with all who resided there.

Throughout his life, he remained a doting grandfather to Dale, Chris, Lisa, Jennifer, Caitlyn, Lindsey and Eduardo and great- grandfather to Lauren, Jesse, Eric, Isaiah, Zoey, Sophia and Sophie.

He was preceded in death by his wives and his sister Evelyn in 2012. Surviving him are his sons, Niles Nelson and wife Bobbie of Libby; Dale Nelson of Polson; and Grant Nelson and wife Marybeth of El Cajon, CA.

A visitation for former students and friends in Libby will be Wednesday (12-11) from 3-8 p.m. at the Schnackenberg Funeral Home.

Funeral services will be Friday (12-13) at 11:00 a.m. at Garden City Funeral Home in Missoula with a reception immediately following in the funeral home hospitality center. Committal service will follow at 2:00 p.m. at Missoula Cemetery. Condolences and memories may be shared online by visiting www.schnackenbergfh.com (in Libby) or www.gardencityfh.com (in Missoula).
Read Less

To plant a memorial tree in honor of Fred Nelson , please visit our Heartfelt Sympathies Store.

There are no events scheduled. You can still show your support by sending flowers directly to the family, or planting a memorial tree in memory of Fred Nelson .
Plant a Tree

We encourage you to share your most beloved memories of Fred here, so that the family and other loved ones can always see it. You can upload cherished photographs, or share your favorite stories, and can even comment on those shared by others.

Posted Dec 14, 2019 at 10:13am
Mr. Nelson had such a positive impact on so many kids, myself included. So many of the kids I played with in high school ended up going into music as a career, in no small part due to his professionalism and high standards. You will be missed. Thanks for the opportunity of being a part of it all. Rob Haines Sentinel High Class of 84.
Comment Share
Share via:
TF

The McIntosh Family purchased flowers for the family of Fred Nelson .

Posted Dec 11, 2019 at 12:05am
We knew of Fred as the band director at Sentinel High School in Missoula, but became more personally acquainted through our brother Skip Rundle who was a band director of the middle schools at the time. When he moved into Grizzly Peak residence, we looked forward to seeing this warm, genuine, smiling guy, always ready for a handshake and visit. He added a positive influence to this community and to the Grizzly Peak. He will be truly missed.
Sincerely, Sandy and Paul Fortmann
Comment Share
Share via:
HS

Bountiful Rose Basket was purchased for the family of Fred Nelson .

Posted Dec 10, 2019 at 08:35pm
I was sorry to hear of Fred's passing. The last time I saw and chatted with him was at the 25th reunion for my U of M band "class" and it was extra special because my mother Margrye Butchart met me in Missoula and attended the Tailgate party and the class breakfast with me. She was thrilled to visit with Fred at these events - dad (Maro Butchart) was teaching in Kalispell when Fred was teaching in Libby and my parents highly respected Fred's musicianship, integrity, and loved a chance to visit with him at festivals, etc. 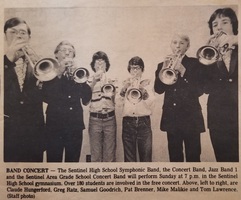