To share your memory on the wall of Gary Beck, sign in using one of the following options:

Gary was proceeded in death by his parents, Larry and Violet as well as his brother Ken Beck. He is survived by his wife Beverly Beck of Missoula, sons Mike (Jeri) Beck of Great Falls, Andy (Erin) Beck of Missoula, daughter Jody Reistad of Deer Lodge, brother Chuck (Donna) Beck of Bozeman, sister in-law Lila Beck of Great Falls, and sister in-law Lynda Munch of Alberton. He is also survived by eight grandchildren; Dakotah, Colter, Whest, Drew, Camryn, Karsun, Adam, and Caleb, with a great grandchild on the way.

A graveside service with military honors will be held at Western Montana State Veterans Cemetery in Missoula on June 7th at 11:00 a.m., with reception to follow at Garden City Funeral Home.

In lieu of flowers Gary would request that donations be made to the Democratic party.
Read Less

To send flowers to the family or plant a tree in memory of Gary L. Beck, please visit our Heartfelt Sympathies Store.

Receive notifications about information and event scheduling for Gary

We encourage you to share your most beloved memories of Gary here, so that the family and other loved ones can always see it. You can upload cherished photographs, or share your favorite stories, and can even comment on those shared by others.

Love, Tom, Becky, Drue and Dylan and Jeff and Debra Blodgett sent flowers to the family of Gary L. Beck.
Show you care by sending flowers

Flowers were purchased for the family of Gary Beck. Send Flowers

Posted Jun 03, 2019 at 11:32am
Sending our sincere sympathies to all of the Beck family.
Thinking of you and hoping that wonderful memories help to ease the pain and loss
and that you find comfort in the love of God, family and friends.
Ron and Donna Berkhof
Comment Share
Share via:
HS

Posted Jun 02, 2019 at 06:42pm
Dear Gary, Thank you for everything! You blessed me with your coaching, guidance, humor, and a good kick in the butt when needed! R.I.P. The Coopers!

Flowers were purchased for the family of Gary Beck. Send Flowers

Posted May 31, 2019 at 08:46am
With love to the family and a sad goodbye to one of my favorite childhood coach and mentor. 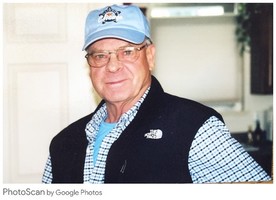