To share your memory on the wall of Gene Collins, sign in using one of the following options:

Born in a farmhouse in Sunnyside, WA to Ellen and Wayne Collins, Gene spent most of his early life in and around Seattle. He graduated in 1946 from Walla... Read More
Gene L. Collins, 91, died on May 30, 2019 at Community Hospital of natural causes.

Born in a farmhouse in Sunnyside, WA to Ellen and Wayne Collins, Gene spent most of his early life in and around Seattle. He graduated in 1946 from Wallace High School and was working for Bennett Lumber Company in DeBorgia MT when he was drafted into the Army in September of 1950. As the first man called from Mineral County to the Korean War, Gene worked as a mechanic for a medical supply depot where his access to a Jeep gave him the ability to explore and take many interesting photos.

After his discharge in September 1952, Gene attended Spokane Trade School for auto body and fender repair but returned to logging in the spring of 1953 with his stepdad, Robert Houx, at Cooper’s Saw Mill and the following year moved to St. Regis to work for the Bennett Saw Mill.

In February of 1954, Gene’s life dramatically and forever changed when he met and fell in love with Mercedine and her two daughters, Linda and Carol. Eight months later, they married, and in the fall of 1955 welcomed their third daughter into the family when Susan was born. Earlier that spring, Gene, along with his brother-in-law Jack MacDonald, started the Husky Truck Stop in St. Regis each working 12-hour shifts to keep round the clock service available. After a year, Gene bought Jack out and continued to operate the truck stop for another 30 years. Part of the business included providing wrecker service for the west end of Mineral County from St Regis to Lookout Pass. Many nights were spent helping accident victims in the canyon on roads “so slick, you couldn’t stand up” including the Greyhound bus wreck in December 1962. While he dedicated much of his life to helping others, Gene also developed a passion for restoring and collecting antique luxury automobiles including a 1930’s Packard and Bentley.

Gene and Mercedine remained in St. Regis until 1993 when they moved to Missoula. He enjoyed not being able to get a word in edgewise because his daughters and family were always laughing and telling stories. In his later years, he looked forward to weekly visits from his nephews, Jon and Stephen MacDonald, to reminisce the old times.

Gene and Mercedine were married for over 60 wonderful years, until Mercedine’s passing in 2015. His parents Ellen Houx and Wayne Collins and sister Thelma Nelson preceded him in death.

Gene is survived by his sisters Lola (Dick) Lile of Spokane and Beverly (Richard) Decamp of Salem, OR; daughters Linda Wikstrom and Bernie Goldman of Edmonds, WA, Carol Collins and Tim Hegg of Missoula, Susan (Tim) Tolman of Missoula; his grandchildren William (Birgit) Wikstrom of Bad Kissingen, Germany, Jennifer (Tushar) Devidayal of Mumbai, India, Allison (William) Hendrix of Missoula, and Quinton Tolman of Missoula; his great-grandchildren Lisa and Anika Wikstrom of Germany, Sanjeet and Katelyn Devidayal of India, and Jaxon Hendrix of Missoula; and several nieces and nephews.

We would like to thank Gene’s wonderful doctors and nurses at the Community Hospital Cancer Center, Hilda’s Room and ICU, and the Village Rebab.

Gene will be interred at the Western Montana State Veterans’ Cemetery at a private family ceremony. A reception will be held on Thursday, June 6th, at Garden City Funeral Home at 3 pm. Please come and join the family, have refreshments and share old and new memories.

Gene was a hardworking, gentle man who was the rock of our family. He will be greatly missed by all. Knowing that he is now with the love of his life, Mercedine, makes our grief easier to bear. Condolences maybe left at www.gardencityfh.com
Read Less

To send flowers to the family or plant a tree in memory of Gene L. Collins, please visit our Heartfelt Sympathies Store.

Receive notifications about information and event scheduling for Gene

We encourage you to share your most beloved memories of Gene here, so that the family and other loved ones can always see it. You can upload cherished photographs, or share your favorite stories, and can even comment on those shared by others.

Posted Jun 08, 2019 at 01:05pm
I worked at Missoula Aging Service I would come in and clean every other week. Gene was always so kind and nice. We talked a lot about his working years and his wife. I caught on real fast why he was so quite he had so many daughters. My father was the same way. He was so proud of all of his family. He was a happy guy and you all took such good care of him. Susie Carr
Comment Share
Share via: 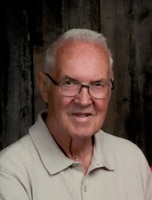