To share your memory on the wall of George Ludemann, sign in using one of the following options:

Print
George Herman Ludemann, age 85, of Missoula, our father, passed away at home with the love of his family by his side. Born in Sabin, Minnesota, to John and Anna Ludemann, he was the 13th of 13 children.

Dad went to school in Barnesville... Read More
George Herman Ludemann, age 85, of Missoula, our father, passed away at home with the love of his family by his side. Born in Sabin, Minnesota, to John and Anna Ludemann, he was the 13th of 13 children.

Dad went to school in Barnesville, Minnesota, where he participated in track and football. After graduation he joined the Army in 1953 and served in the Korean War. Upon his return home, he met the love of his life, Lerae Ann Roesch and they were married in 1956. From that union they had three children, Marty, Robin, and Karen.

Dad moved his family to Montana in 1960 and scooted across the state and finally settled in Missoula in 1964. That is when dad became a U of M Grizzly fan. Dad worked at Coast-to-Coast for 23 years and then worked at Hellgate High School for 15 years. In September of 2019, he had the honor of being inducted into the Hellgate Athletic Hall of Fame. Dad loved every minute at Hellgate. He made many lifelong friends and kept in contact with some of his old students. He was also an avid golfer and didn’t even mind when mom beat him in a round or two. Dad was so proud of his family and their accomplishments. He always let people know how many grand children (4) and great grand children (10) he had. He was a very proud man. We, as his children, learned great work ethics from dad and mom. Our days are going to be a little less bright because he is no longer with us. Dad give mom a hug from us. May God bless you and keep you.

In addition to his parents, he was preceded in death by his wife of 56 years, Lerae; 11 siblings; and a son in-law Michael Brown.

A special thanks to his caregiver and friend, Melody, and also to Hospice Home Care for taking such good care of our dad.

A private graveside service with military honors will be held for the family at Western State Montana Veteran’s Cemetery. Arrangements are under the care of Garden City Funeral Home.

Dad was loved by so many that after the pandemic is over, a celebration of life will be announced for everyone to attend.

The online obituary and guestbook is available at www.gardencityfh.com.
Read Less

To send flowers to the family or plant a tree in memory of George Herman Ludemann, please visit our Heartfelt Sympathies Store.

Receive notifications about information and event scheduling for George

There are no events scheduled. You can still show your support by sending flowers directly to the family, or planting a memorial tree in memory of George Herman Ludemann.
Visit the Heartfelt Sympathies Store

Posted Sep 15, 2020 at 01:43am
Dear Ludeman family,
George was such a wonderful force in Hellgate’s life. He knew the athletes, the teachers, and coaches so well. It was an honor to have him remember us and our kids. I fondly remember eating pizza as a teenager when he had the shop on North Tracy in Bozeman before he came to Hellgate. It was wonderful to see him last September at the Athletic Hall of Fame celebration. RIP George of the big heart and the dedication to others.
Ken Ballinger
Comment Share
Share via:
BW

Posted Sep 13, 2020 at 06:06pm
Besides the fact that my husband and I lived next door to John & Carrie Brown and got to know George that way who in Missoula doesn’t remember being met by an extremely helpful ,personality plus person in Ace Hardware. How many families were touched by the dedication he gave to “his kids” at Hellgate. We also sat in the same section at the Griz games and it was always great to see George. We always came away with a smile.
Sincerely,
Betty westman
Comment Share
Share via:
EH

Posted Sep 13, 2020 at 02:35pm
To Marty, Robin, and Karen. So many cherished memories that we look forward to sharing with you when we can all gather to celebrate the amazing, loving, generous life of our newest angel. Thanks for sharing your Dad with us. Eric and Deb Hays
Comment Share
Share via:
A

Posted Sep 13, 2020 at 11:12am
My condolences to George's family in the loss of a wonder man. I remember him from the VA Clinic in Msla. where I was a staff nurse. We had short conversations through the years, especially, in reference to his family members. He was always so jovial and happy go lucky. Jan Anthony
Comment Share
Share via:
JH

Posted Sep 13, 2020 at 10:02am
Our deepest condolences to the Ludemann Family. George was a such a gem and we feel honored to have known your parents and be a part of the Hellgate family. Jane, Wendy, & Erika Haker
Comment Share
Share via:
RJ

Many great memories to one of the nicest and sweetest guy we ever met. It was my pleasure to share In the presentation of George’s Hellgate athletic Hall of Fame. You are in our heart always. Our prayers go out to Marty, Karen and Robin. We will miss the big smiles, the big laughs and the spontaneous jokes from our dear friend George. Ron and Bev Jones 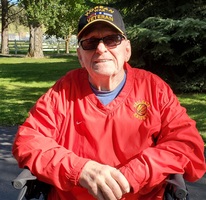