To share your memory on the wall of Harold Rodriguez, sign in using one of the following options:

Provide comfort for the family of Harold Rodriguez with a meaningful gesture of sympathy.

Print
Harold Walter Rodriguez, 33, of Miami, Florida, passed away on Sunday, September 1, 2019 near Ronan, Montana, in a fatal car accident.

Harold was born on October 25, 1985 in Caracas, Venezuela to Silvana Marinucci and Lorenzo Rodriguez. ... Read More
Harold Walter Rodriguez, 33, of Miami, Florida, passed away on Sunday, September 1, 2019 near Ronan, Montana, in a fatal car accident.

Harold was born on October 25, 1985 in Caracas, Venezuela to Silvana Marinucci and Lorenzo Rodriguez. Around the age of 5, Harold with his family came to the United States. Harold was raised in the Miami, Florida area with his younger sister, Loredana Rodriguez.

Harold was an exceptional student and had a brilliant mind. He graduated from the University of Florida in 2008 with two Bachelor Degrees, B.S. in Physics and B.S. in Computer Science.

On May 10, 2015 Harold married Jennifer (Roth) Rodriguez. They met at the University of Florida on a salsa dance team.
The couple had been best friends for over 13 years and shared four years of marriage.

Harold and Jennifer lived in Boston, Massachusetts, for five years where he started his career as a Software Engineer. Harold was a hard worker, dedicated and disciplined.
His professional career was exceptional and he was very talented in his craft. He continued to train himself and master many computer languages, coding, and software applications.

Harold loved fitness and health. Harold was a talented salsa dancer and a highly skilled musician. He performed around the county with his wife and teams.

In 2016, Harold and Jennifer took an adventure of a lifetime, traveling through Asia for five months. The couple visited 12 countries and over 33 cities. Harold’s favorite country was Japan.

Harold lived his life every single day to the fullest. Harold was kind, loving, patient and dependable. He loved his dog, Mr. Wiggles, a two-year-old Pug. Mr. Wiggles was his best friend.

Harold dedicated his time to learning over five foreign languages and playing over 10 instruments. Just recently, Harold earned his open-water scuba diving certification and went skydiving.
He truly had a courageous heart.

Harold is survived by his wife, Jennifer, mother (Silvana), father (Lorenzo), sister (Loredana), and Mr. Wiggles.
He is also survived by his family in Venezuela, including his maternal grandmother.

Harold passed away having achieved his dream of becoming a U.S. Citizen on August 2, 2019. In Harold’s memory, his family will advocate for the millions of Dreamers just like Harold, who deserve to live with dignity in the United States of America.
Read Less

We encourage you to share your most beloved memories of Harold here, so that the family and other loved ones can always see it. You can upload cherished photographs, or share your favorite stories, and can even comment on those shared by others. 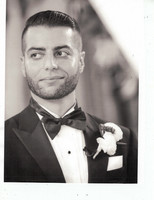