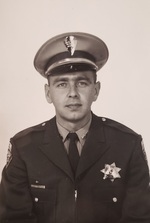 He was born in Butte, Mt to Robert C and Margaret Lemm on January 15, 1937. He has one brother Robert C Lemm Jr and is preceded in Death by his sister Patty Sicotte. Howard attended Emerson Grade School and Graduated from Boys Central in 1955. Howard served in the Navy on active Duty in 1956, 1957. Served aboard the USS Carrier Essex CVA 9 and in Aviation Statistics.

While living in Butte he worked in the Berkely Pit driving truck and then on a blasting crew. He was a volunteer member of the Atherton Fire Dept.

He was most proud of the nine years he served on the Montana Highway Patrol. He first served in Havre, Mt and then transferred to Butte, Mt.

He and Shirley and the family moved to Lolo, Mt in 1971 where they started Lemm Landscaping and Nursery, doing Hydro seeding, straw mulching on Forest Service roads and fencing, paint striping on Highway contracts.

He sold and serviced Gaming machines for many years in and around Missoula, later he would become a Private Investigator. He shined in this new role, as he loved helping people. Many times, he would take to heart what he was doing and do pro bono cases. He touched many lives and to this day has become friends with many of his clients.

He enjoyed Speed Skating, for many years holding the record at Emerson school. And he reminded us many times of his record. When he did anything, it was a 100% family affair, from skiing every resort in Mt, to racquetball tournaments, golfing, camping, and fishing. Many a fishing stories have been shared and enjoyed.

He was a start up member of Big Brothers and Sisters in Butte, member of Lolo school Board, Associate member of Montana Highway Patrolmen, Eagles Lodge Member for over twenty years. Was a volunteer for Special Olympics, and a fund raiser for St. Jude’s.

Cremation has taken place and a Celebration of his life will be held June 26, 2021, at the family residence at 3:00 P.M. A Veterans ceremony will be held on June 25th .