To share your memory on the wall of Ian McDonald, sign in using one of the following options:

His adopted family adored every minute with him and tried to give him all the opportunities as a healthy child would.

Ian thrived in Special Olympics, and was an accomplished golfer, bowler, and bocce champion. He loved all sports, and you would not meet a more devoted Griz fan than Ian. He loved cheering for his favorite teams, and many Sundays he would wear multiple team jerseys to match the game he was watching.

Ian was a master video gamer, and often would make up his own Madden rosters with Montanan players. He would play hours on end while listening to his favorite music group, The Backstreet Boys. He considered himself the unofficial sixth member of the Backstreet Boys, and would insist that he sounded just like Nick Carter. He would sing loud and proud so the neighbors could enjoy his talent.

Ian was a connoisseur of fine foods, anything with cheese was considered gourmet. There was not a cuisine or experimental recipe he would not try, just as long as he could pair it with a root beer and top it off with an ice cream sundae.

Besides Special Olympics, Ian was a fourth degree Knight of Columbus and worked many fundraisers and event with his group. He was a devout member of Blessed Trinity Catholic Church.

The McDonald Family would like to thank all the doctors, nurses, therapists, teachers and coaches who helped us with Ian’s journey.

In remembrance of Ian, please make someone happy today.

The funeral service will take place 10 am on Friday, June 5th at Blessed Trinity Catholic Church, 1475 Eden Street, Missoula Montana. A graveside service will follow at the Old St. Mary’s

Cemetery. Social distancing protocols will be in place. Arrangements are under the care of Garden City Funeral Home.
Read Less

To send flowers to the family or plant a tree in memory of Ian James McDonald, please visit our Heartfelt Sympathies Store.

Receive notifications about information and event scheduling for Ian

There are no events scheduled. You can still show your support by sending flowers directly to the family, or planting a memorial tree in memory of Ian James McDonald.
Visit the Heartfelt Sympathies Store

We encourage you to share your most beloved memories of Ian here, so that the family and other loved ones can always see it. You can upload cherished photographs, or share your favorite stories, and can even comment on those shared by others.

Posted Jun 05, 2020 at 06:31pm
I had to look really hard at this handsome young man and then remembered him from a long time ago. I worked at a pediatric office and he would come in in full Griz regalia and did a good job of giving this Bobcat a hard time, but of course i gave it back. He was one of my favorites. I am sorry to hear of his passing.
Comment Share
Share via: 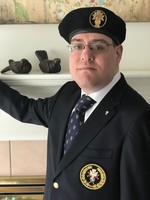