To share your memory on the wall of Jack Mitchell, sign in using one of the following options:

Print
Jack E. Mitchell passed away October 10, after a brief and sudden illness.
For more than 92 years, his family and friends were blessed with his love and friendship. His zest for life and his jovial attitude, which was reflected by his ready wi... Read More
Jack E. Mitchell passed away October 10, after a brief and sudden illness.
For more than 92 years, his family and friends were blessed with his love and friendship. His zest for life and his jovial attitude, which was reflected by his ready wit and humorous off-the-cuff expressions, endeared him to all who were fortunate to have him in their lives.
Jack was born in the Snoqualmie Falls hospital on January 18, 1927, and spent his early years in the Seattle area. After visiting Missoula with a friend, he chose to return and took a job at H.O. Bell Ford. Shortly thereafter, Jack was befriended by Bob Hagan who invited Jack to come live with his family and go to work for “Pappy Hagan.”
Upon receiving his draft notice, he tore it up and immediately enlisted. Jack’s military service in the US Army spanned nine years, 1945 to 1954, and half that time was spent in Austria. There he oversaw many displaced persons who had been conscripted into Hitler’s army. With no way to get them back to their homelands, the U.S. gave them work in ordnance rebuilding of vehicles and machinery. Jack’s hard work ethics never denied him the opportunities he found for fun and recreation. While in Europe, Jack took up skiing and playing fast pitch softball. He was the winning pitcher in two European championship games.
Upon his honorable discharge, he brought his family back to Missoula, where he and his wife Micky and their three children settled into a new house at 1010 Cleveland Street. After working several years for Olney Motors, Jack decided to start his own automotive business. He open Jack’s Trans-Electric around 1958, and along his loyal friend and mechanic Dick Meisinger, they became well known as the go-to-guys if you had automotive problems.
Jack was truly a man for all seasons. Skiing was such great passion for him and so many times, his long-time friend Dave Peach and their ski buddies would entertain us with their stories from the good old days at Snowbowl and Marshall. Jack became the first ski school instructor at Marshall, and the Greens embraced him as one their own.
Jack was an all-around athlete and established quite a reputation as a pitcher in Missoula’s early fast pitch league. Being the “old guy” to go up against Moe Smith, Lenny Wicks and the Shaffer boys always added to the enjoyment of the games. Jack took some memorable road trips on his Honda 500, and he explored local trails and terrain on his Honda 90 trail bike.
After Jack and Micky divorced, they continued to remain friendly and respectful to each other as each went their ways. Jack was in his forties when he was introduced to golf and his future wife, demonstrating great passion for both.
After several years and many, many ski and golf dates, Jack and Renee Gibbs formalized their devotion to each other and were married February 29, 1980.
Jack loved reading and made weekly trips to the library. He loved tinkering and fixing things. He took pride in tending his yard and raspberry garden. His friends and neighbors enjoyed his cheerful spirit and wonderful wit and sense of humor. He adored his children and grandchildren, also Renee’s family, and they so loved him in return. It is difficult to not be sad at Jack’s passing, but he has left us with so many great life experiences and lessons and so many joyful memories.
In addition to his many and dear friends, Jack leaves behind his loving wife Renee, son Gary and friend Tana, daughter Sherron and son-in law Cam, daughter Jackie, two granddaughters and four great grandchildren. Sisters Geraldine and Eleanor preceded him in death. Bro-in-law Dan Corts survive him, along with his sisters’ children and a cousin in the Seattle area. His “buddy Wild Bill” and sis-in-law Shelly are broken hearted, yet so grateful for the time we all spent together.
There will be a celebration of life on Monday, October 21, at Garden City FH, and we invite you to join us. In lieu of flowers, any tribute to Jack should include expressions of love and appreciation to your family, friends and neighbors…
…and an ice-cold beer, of course!
We love you Jack, and you are forever in our hearts.
Read Less

To send flowers to the family or plant a tree in memory of Jack E. Mitchell, please visit our Heartfelt Sympathies Store.

Receive notifications about information and event scheduling for Jack

We encourage you to share your most beloved memories of Jack here, so that the family and other loved ones can always see it. You can upload cherished photographs, or share your favorite stories, and can even comment on those shared by others.

Doug and Anne sent flowers to the family of Jack E. Mitchell.
Show you care by sending flowers

Posted Oct 22, 2019 at 01:05pm
Sending our heartfelt condolences and big hugs to Renee and all of Jack's family. What an amazing human being! He knew how to liven up a gathering, and to engage anyone in conversation. May his wonderful spirit live on! Love- Bev and Steve Glueckert
Comment Share
Share via:
KM

Posted Oct 20, 2019 at 07:51am
As a retired Missoula Public Library worker, I remember Jack. I introduced myself years ago as Moe Smith’s daughter and I enjoyed watching the games of my childhood. Thanks for the memories and for the nod to the old guys.
Comment Share
Share via:
DA

Doug and Anne purchased flowers and planted a memorial tree for the family of Jack Mitchell. Send Flowers 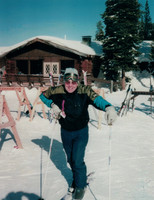