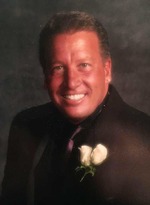 Jeff was raised and educated in Great Falls. He graduated from Great Falls High in 1981 and then attended the University of Montana. Jeff married Corinne L. Thayer in 1982, and from this marriage they were blessed with their children, Zane, Heather & Amanda.

During his career, Jeff worked as a loan officer for several banking companies in New Mexico and Montana. In his 27 years of banking, Jeff developed a large circle of friends, customers, and co-workers that reached near and far.

Eventually, Jeffery moved his family to Missoula to continue his banking career. This is where he would meet his future wife, Nicole R. Edwards. They were married in 2003.

Jeff was a dedicated Griz fan and enjoyed attending Saturday football games. He also loved golfing, weightlifting, the Dallas Cowboys, and volunteering at the Missoula Food Bank. One of his proudest achievements was being a Grandpa to his 6 beautiful grandchildren.

A service for Jeff will be held in Missoula at Zootown Church on Saturday, February 27th at 1 pm. Flowers may be sent to Garden City Funeral Home. In Leau of flowers, please consider donations to The Humane Society of Western Montana.

Those who cannot attend are invited to watch the live-streamed service at https://zootown.church