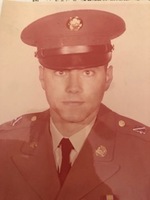 Jeffrey Elder Hughes, a 4th generation Missoulian, passed away unexpectedly on Monday, March 28, 2022 at the family home at the age of 72.

He was born on April 3, 1949 in Missoula, to Catherine and Blaine Hughes. He attended St. Anthony’s elementary school, Loyola High School and graduated from Sentinel High School in 1967.
After graduating, he worked at the Bonner Mill for a short time, then enlisted in the Army.
He was stationed in Germany during his tenure, which he was very proud to have served and was involved in the local VA. Upon returning, he enrolled in the U of M and worked for the State Highway Dept. He was a great learner so much that he received 3 degrees from the University. His hobbies were running, working out, traveling, camping and socializing with anyone that would listen, especially all the fine staff and members at the Peak.

Later in life, he was a caregiver to his mother and had a wonderful bond with her, even though her Irish temper would sometimes come out more often than not. Usually, it was well deserved. He loved his Irish roots and was able to visit Ireland and mingle with the locals to discuss family history.
As a devout Catholic, he attended Mass regularly.
Jeff will be missed by all his friends, family and all the great neighbors on the 600 block of E. Kent Ave. He was a kind, intelligent and caring person.

He was predeceased in death by his parents, Catherine & Blaine, brother Dan and sister Patricia.
Funeral services will be on Friday, April 8th with Mass at St. Anthony’s at noon. Burial will be at 1:30 at the Missoula Veterans Cemetery with full military honors.

Donations can be made at Youth Homes of Missoula or Habit for Humanity.