To share your memory on the wall of Joan Waters, sign in using one of the following options:

Provide comfort for the family of Joan Waters with a meaningful gesture of sympathy.

Print
MISSOULA — Joan Margaret Horan Waters, 82, passed away on Thursday, May 16, 2019, at St. Patrick Hospital in Missoula of natural causes.

She was born on Oct. 6, 1936, in Los Angeles, California, to Charles and Peggy Horan. She spent he... Read More
MISSOULA — Joan Margaret Horan Waters, 82, passed away on Thursday, May 16, 2019, at St. Patrick Hospital in Missoula of natural causes.

She was born on Oct. 6, 1936, in Los Angeles, California, to Charles and Peggy Horan. She spent her childhood in southern California and attended the University of California, Los Angeles.

She loved to travel and visited many countries in Europe with her parents and extended family, and was especially fond of visiting Ireland, where her mother was born. In her twenties, she traveled to Rome and took a job with Catholic Relief Services near the Vatican.

She married James P. Waters, Jr. on Feb. 25, 1967, in Los Angeles. They lived in Albuquerque, New Mexico, for a short time until moving to the Washington D.C. suburbs, where they lived for almost twenty years. They had three children, Cathleen, Christopher and Maggie. They moved to the Missoula area in 1988, and enjoyed the mountains, wildlife and natural beauty of Montana. They were married for fifty years, until Jim’s death in 2017.

Joan was active in Missoula Catholic schools and the Catholic community, having fond support of St. Joseph's and Loyola, where her two youngest attended. She was involved in St. Francis Xavier as an usher for many years, as well as a knitting and quilting group. She enjoyed knitting blankets and baby items to support the pregnancy resource center in Missoula.

She devoted her life to caring for others, her parents, in-laws, children, husband, and community. Survivors include her daughter, Cathleen; son, Christopher (Nico); daughter, Maggie (John); and one grandson, Christian.

We encourage you to share your most beloved memories of Joan here, so that the family and other loved ones can always see it. You can upload cherished photographs, or share your favorite stories, and can even comment on those shared by others. 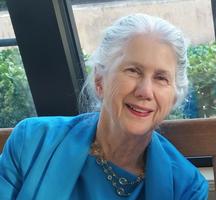