To share your memory on the wall of John Degele, sign in using one of the following options:

Provide comfort for the family of John Degele with a meaningful gesture of sympathy.

John was born to Snodie Elizabeth Saffell and John (Johann) Kasper Degele on February 28, 1935 in Bridger MT. John and his siblings are first generation American born to the Degele’s. He took work on the railroad before marrying his soul mate, Mary Ann Meznarich on October 6, 1955. He was 20, she was 16. They would spend the rest of their time together exemplifying dedication and love.

John enlisted in the United States Army March 11, 1956. After 15 months stationed in Germany he was honorably discharged. He arrived home to his wife and son, Raymond Paul in Roundup January 1, 1958. In the next three years he and Maryann welcomed Martin Lee and Bud Alan to their family. By 1960 John was working at Eddy’s Bakery in Billings. He spent time baking elsewhere in the area before moving his family to Oregon in 1969. They settled in Hermiston. John’s love of fishing flourished as he traveled the state making memories with his cousins, most notably Raymond Saffell, his children, grandchildren, and friends.

On November 4, 1974 John and Mary Ann opened Mary Ann’s Sweet Shoppe and taught their sons to bake. It was here his grandchildren lovingly remember early mornings, naps on flour sacks, and the click clack of John’s boots as he twirled Mary Ann around the kitchen.

After ten years of self employment, John sold the Sweet Shoppe to retire from Tri-Cities Costco in 1997. They sold their home and took to the road in their infamous, immaculate motorhome. They continued spending time with their children and grandchildren in Oregon, Washington and Montana. They traveled to Yuma AZ in winter. In 1999, John and Mary Ann danced for the last time together on this earth. John spent the rest of his winters traveling to Yuma and collecting his dream (now classic) cars. John spent the last summers of his life living with Bud in Arlee MT and traveling to visit his family.

He is reunited with his wife, four sisters, Bertha Martinez, Daisy Degele, Mary Taniguchi, and Freda Wolff, three brothers, George, Paul, and Jim, many cousins, his parents, and one grandchild, Noel Wilson. He is missed dearly by his siblings Tony, Floyd, Clara Groover, and Joe. He is survived by the three sons he is so proud of and their respective wives, Debi, Stacy, and Laura, eight grandchildren, Mihca Anderson and husband Thor, Buddy Degele, Joseph Degele and wife Kristina, Deserie Ives and husband Shawn, Marlee Degele, Andrew Hardy, Chelsea Kadron and husband David, Curtis Mackey and wife Tabitha, fourteen great-grandchildren, and the many friends John welcomed as family.

An event on Facebook has been created to keep everyone up to date regarding John’s memorial. Go to https://www.facebook.com/events/509517206622894/
Read Less

Receive notifications about information and event scheduling for John

There are no events scheduled. You can still show your support by sending flowers directly to the family, or planting a memorial tree in memory of John Degele Jr..
Plant a Tree

We encourage you to share your most beloved memories of John here, so that the family and other loved ones can always see it. You can upload cherished photographs, or share your favorite stories, and can even comment on those shared by others.

Plant a Tree in Memory of John
Plant a tree 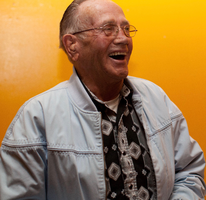