To share your memory on the wall of Justina Henkel, sign in using one of the following options:

She was a teenager in Hitler’s Youth Army. At the end of World War II, she married Daniel Henkel and she came to America in the early 1950’s by boat from the North Sea through the English Channel to Ellis Island, New York.
She learned English, gained her American citizenship, and worked at Providence St. Patrick’s Hospital as a CNA for over 28 years.

She was a member of Blessed Trinity Catholic Church, Missoula Clogging club, and the Red Hat Ladies.

In addition to her parents, she was preceded in death by her husband, Daniel Henkel; and her siblings.

The graveside service will be at 2:00 p.m., on Wednesday, October 14, 2020, at Sunset Memorial Gardens with Father Ed Hislop officiating, with arrangements under the care of Garden City Funeral Home.
Read Less

To send flowers to the family or plant a tree in memory of Justina Henkel, please visit our Heartfelt Sympathies Store.

Receive notifications about information and event scheduling for Justina

There are no events scheduled. You can still show your support by sending flowers directly to the family, or planting a memorial tree in memory of Justina Henkel.
Visit the Heartfelt Sympathies Store

We encourage you to share your most beloved memories of Justina here, so that the family and other loved ones can always see it. You can upload cherished photographs, or share your favorite stories, and can even comment on those shared by others. 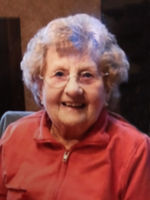