To share your memory on the wall of \"Kay\" Fitzgerald, sign in using one of the following options:


A private service will take place at Garden City Funeral Home, Missoula, MT, with a
celebration of life at a later date. The service can be viewed live below on August 6 at 1:00pm To send flowers to the family or plant a tree in memory of "Kay" Mary Kathleen Fitzgerald, please visit our Heartfelt Sympathies Store.

Receive notifications about information and event scheduling for "Kay"

Print
A private service is being held on August 6th but can be viewed live at the link above,

We encourage you to share your most beloved memories of "Kay" here, so that the family and other loved ones can always see it. You can upload cherished photographs, or share your favorite stories, and can even comment on those shared by others.

Posted Aug 06, 2020 at 04:08pm
One of my fondest memories of Kay involved a particular Sunday at St. Joseph’s Church. When I got to mass to sing in the choir with her she informed us that we were having a substitute priest. She didn’t know his name at the time but she had seen him come to get ready so she told us she named him” father easy on the eyes“ .- since he was quite handsome! Kay always had the best sense of humor! Kay was such a lovely and kind lady.
I can’t picture her without a smile. I met her at a time in my life when I needed to see smiles. She never failed me.
The angel choirs have gotten a beautiful soprano.
Love, Patty Wood

My mother inherited a humorous way with words from her father (which I unfortunately did not inherit), which was always good for a chuckle. And she always appreciated good-looking men! Thank you for this memory!
KH

Posted Aug 06, 2020 at 03:25pm
Kay was a such a kind, warm friend from many years ago. My deepest sympathy to her family. May she Rest In Peace and Power.

Thank you, Kathryn. She talked about you, and we know she loved you!
KL

Posted Aug 06, 2020 at 12:47pm
When Jim and I moved back to Madison in 2000 we had a fire and lost most of our belongings. As a musician, the loss of my collection of musical scores was particularly difficult. I was going back to school to get certified to teach, Jim was an apprentice so I was doing church gigs to supplement our meager income. Kay was helpful and generous by helping me find the music I needed and also sent a few jobs my way. Tom and Diane, your Mom was special to us and we have many good memories of her.
Rest in Peace Kay.
Jim and Katrina Lemens
Comment Share
Share via:
DM

She was so generous. I’m glad some of it came your way.
JL

Jay and Bernadette Gagen and Family 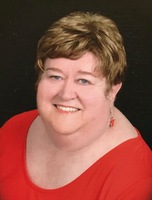