To share your memory on the wall of Kenneth Cadieux, sign in using one of the following options:

Print
MISSOULA — Kenneth Allen Cadieux, 73, passed away on March 4, 2020 after a long battle with lung cancer.

Ken was born July 10, 1946, in Jamestown, North Dakota to Kenneth James and Edna Mae Cadieux. Ken soon moved to Sioux Falls, South Dakota, with his family and later joined the Navy. He served our country from 1964-1967, where he fought courageously in the Vietnam War.

Two years after returning home safely from Vietnam, he met Nancy Gail Roberts and the two of them married on July 4th in Las Vegas, Nevada.

Ken Loved the outdoors and was an avid fisherman. If he wasn't at home, he was found fishing in Thompson Falls or Brown's Lake! He had a deep passion for music, especially the blues which has carried on to his children.

A funeral will be held on Friday, March 13, 2020 at 10 a.m. at the Western Montana Veterans Cemetery, with a memorial potluck service following at the American Legion Hall in Missoula at noon.
Read Less

To send flowers to the family or plant a tree in memory of Kenneth Allen Cadieux, please visit our Heartfelt Sympathies Store.

Receive notifications about information and event scheduling for Kenneth

We encourage you to share your most beloved memories of Kenneth here, so that the family and other loved ones can always see it. You can upload cherished photographs, or share your favorite stories, and can even comment on those shared by others. 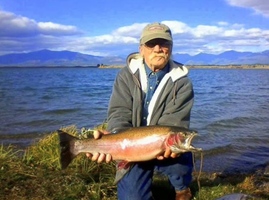