To share your memory on the wall of Laurice Fritz, sign in using one of the following options:

June 4th, 2019 – Laurice Fritz (78) passed away at her home after a short but hard fought battle with cancer.
Born April, 20th, 1941, as Maryln Laurice Roark but forever after known as “Laurice”, to Nellie Morris Roark and Beryl Easton Roark. They, along with her older brother, Douglas Roark, lived on a small ranch outside Potomac. Later they moved into Missoula where her father opened Ace Auto Salvage. Answering the phones was her first job. Her mother and Uncle Fred still ran the family ranch on Sunset Hill Rd. and her aunt Patsy Wilson had a ranch on Cottonwood Creek so she spent a lot of time in the Blackfoot Valley.

As a young girl, she loved gymnastics, animals, books and cars! At one time she had both a skunk and a pig as pets! And dogs, especially Bassets! She would go on in her life, to take in every stray dog that she came in contact with. Reading was one of her great loves. She could finish a book in matter of hours and had numerous old and new books around her house.

At the age of 14, she met her best friend for life, Jean Nelson (Goldsby). They would have kids at the same time and have husbands with similar interests, namely cars and racing. Many a summer night was spent racing cars! In high school is where she met her future husband, Ronald Fritz. They would end up getting married after high school and having two daughters.

Laurice together with her mother, good friend Velma and later her daughter Susan, oved dealing in Antiques and collectables. She loved to research and talk to others about a piece and its history. She especially liked to make a good deal whether it be buying or selling!

For the past several years, after retiring, she has spent most of her time at the ranch on the Blackfoot. She loved to watch the deer, elk and other wildlife while enjoying the solitude.

To plant a memorial tree in honor of Laurice Fritz, please visit our Heartfelt Sympathies Store.

Receive notifications about information and event scheduling for Laurice

There are no events scheduled. You can still show your support by sending flowers directly to the family, or planting a memorial tree in memory of Laurice Fritz.
Plant a Tree

We encourage you to share your most beloved memories of Laurice here, so that the family and other loved ones can always see it. You can upload cherished photographs, or share your favorite stories, and can even comment on those shared by others.

Posted Jun 25, 2019 at 11:35am
I am so sorry for your loss. Please take comfort in John 5:28, 29 and 1 Corinthians 15:26, where God promises that we will be reunited with our loved ones here on earth in the near future and will never have to fear losing them again. 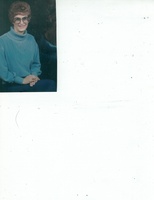