To share your memory on the wall of Marilyn Rodriguez, sign in using one of the following options:

Provide comfort for the family of Marilyn Rodriguez with a meaningful gesture of sympathy.

Marilyn received her BA degree from Mundelein College in Chicago and MEd from the University of Montana, Missoula. She taught at St. Anthony in Missoula, for 5 years, Wenatchee WA for 1 year and Project 100 in Missoula for 10 years. On December 3, 1977 she married Frank G. Rodriguez in Missoula. During the course of their marriage they lived in Missoula, Sula, Pablo, Darby, and Hamilton and retired to Missoula in 1990 where she resided at the time of her death. They had one daughter Belinda Maria.

Marilyn was very involved in many church and community activities. Her greatest joys were teaching, and working with children, gardening and reading. She was a 4-H leader for 15 years. She was preceded in death by her parents and Frank in 2002.

She is survived by her daughter, Belinda, James Quinlan and Granddaughter Iris Quinlan, her sisters and their spouses. Barbara and Bob McCauley, Martha and James Henry, Therese and Chuck Harper, and her brother Ed Hazen as well as many nieces, nephews, aunts, uncles, cousins and friends.

To send flowers to the family or plant a tree in memory of Marilyn Frances Rodriguez, please visit our Heartfelt Sympathies Store.

Receive notifications about information and event scheduling for Marilyn

We encourage you to share your most beloved memories of Marilyn here, so that the family and other loved ones can always see it. You can upload cherished photographs, or share your favorite stories, and can even comment on those shared by others.

The Quinlans Family sent flowers to the family of Marilyn Frances Rodriguez.
Show you care by sending flowers

The Quinlans Family purchased flowers for the family of Marilyn Rodriguez. Send Flowers

Posted Sep 21, 2019 at 08:51am
Marilyn was an embodiment of kindness and honesty. She loved wholeheartedly. She will be very missed. Our condolences, Jennie and Justin Valley. 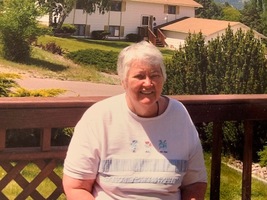