To share your memory on the wall of Mark Wolfe, sign in using one of the following options:

After high school, Mark began a life of adventure; traveling to Mexico, Central America and Columbia. He lived with the locals, learning their customs, experiencing their food, and living simply; hitchhiking back and forth between these countries and the US for several years.

During his summer travels he was introduced to the rafting community and was hooked. He worked a couple winter seasons at Crested Butte, so that he could ski. In 1981 he landed in Yellowstone and worked late summer through fall. Then he and 4-6 friends headed to Whitefish.

Mark supported himself as a cook, a busboy, and then waiter at Grouse Mountain Lodge. He mastered all the slopes of Big Mountain and much of the surrounding back country. In the summers he spent time on Whitefish lake in his small sailboat, floating the waters of the Colorado, Selway, Snake, and other western rivers, as well as hiking and camping in the Bob Marshall Wilderness.

Around 1999 he moved to Polson to take over his parents’ residence. He began carpentry full time. Unfortunately, the demands of his work were hard on his beat-up skiing body. Additionally, the winters were difficult due to damage to his feet and hands caused by hypothermia years earlier when his sailboat capsized. In the end, the years of hard living took their toll. Mark lived life on his own terms.

A Celebration of Life BBQ/potluck will take place in Polson on July 25th. Read details in June on the online website hosted by Garden City Funeral Home at https://www.gardencityfh.com/obituary-listing. Additionally, see the website for a slideshow of Mark’s life.

In lieu of flowers please visit one of the following websites if you are 18 years or older and do not have a Living Will. Do this for family members, if not for yourself. It is simple, fast, and some states only require two people to sign as witnesses. It then can go into a database for easy access, and it is free!!! https://www.legalhandle.com/living-will-form.html or https://eforms.com/living-will/
Read Less

To send flowers to the family or plant a tree in memory of Mark Franklin Wolfe, please visit our Heartfelt Sympathies Store.

We encourage you to share your most beloved memories of Mark here, so that the family and other loved ones can always see it. You can upload cherished photographs, or share your favorite stories, and can even comment on those shared by others.

Posted Feb 10, 2020 at 11:48am
Wow, I don't know where to start. Mark was such a huge part of my wife Mary and my life. I met Mark in Yellowstone in 1981 where I was working and he came up at the end of the season to see friends there and do some hiking. We became friends right away and after the end of the season the two of us, along with 4 other friends migrated to Whitefish where we would settle in for many years. My memory from that migration is that I rode up to Whitefish with Mark in his 1950something Chevy truck with his old camper on the back and as we were descending into Butte (this was my first experience with descending one of the Rockies' "big hills") off of Homestake Pass I remember hanging on and praying for dear life that the brakes held, they did, we made it. In the next 20 years, we would be next door neighbors for 15 of those. The biggest part of our journey was skiing Big Mountain. I spent more days on skis in my life with Mark than any other person and I believe that the reverse is true, that Mark did not ski more days in his life with any one else than me, we had a frickin' blast year after year ripping up that mountain.

One particular funny episode was on New Years Day, not sure what year, mid 80's, but we had, of course, been out the night before "doing it up" for New Years and it was EARLY on New Years morning, we were "sleeping it off" when there came a knock, knock, knock on the door of Mark's trailer home, so Mark rose out of his fog, looked to see who was at the door and there stood......Mark's parents! They were on their way to or from a short trip to Canada and just wanted to "stop in to say hi." You can imagine our surprise. and I will NEVER forget the incredible speed with which we came to life and did a 30 second "sweep" of the house before welcoming them in. Ahhh, the good ol' days, eh?
See you all July 25th!
Tom Meagher
Comment Share
Share via:

Posted Jan 19, 2020 at 06:28pm
I met Mark in the late 1990’s and hired him to help me on a couple day Post Office renovation in Libby, MT. We hit it off right away and Mark continued to work construction for me for the next several years. Mark was a joy to work with and got along with everyone. We laughed at his stories, mostly because he didn’t just tell them, he acted them out, whether it be rafting the Salt River, which I assumed to be his favorite as he would take 3 weeks off at the most inconvenient time to float it with a few of his good friends. We always made due and he was reenergized after returning, it’s what kept him going. Skiing deep powder was another arm flailing and body moving animation that brought several laughs. Mark talked a lot about his dad, mom, sisters, nieces and nephews, but you could tell that he especially, looked up to his brother Kevin and how he lived, as short as his time was. I’m really glad my 3 sons got to know and work with Mark, and my wife Pam and I will miss the Thanksgiving and Christmas dinners we were able to share. I am deeply saddened by his passing and will forever wonder if I could have done more. I hope to see you on the other side my friend!

Thank you Brett. He spoke highly of you, and I was grateful that he had family to hang out with on the two major holidays. I too wonder if there was more that I could have done. All of us who wonder that need to remember that we did our best with what we knew at the time. Mark always did things his way regardless, and therefore we need to be okay, somehow with that. Remember him when he was vibrant, as you described above. Hopefully I will get to meet you July 25th.
KW

Brett, I wanted to add that a couple other men also said they were glad that their sons got to know and spend time with Mark. That warms my heart, and thank you for saying that. I wish my dad could have heard those comments about him while he was alive. Additionally, multiple people tried to help Mark, but he had a mind of his own, and would not accept it. He only agreed to go to the hospital when too weak to stand on his own, and after asking if he wanted to die, he replied no. Even then, he continued to ask to go home. But, on his second day in ICU at St. Pats, when asked if he wanted a beer or to go through detox, he said detox. So he died sober and at peace. His body was ill from severe pneumonia, sepsis, blood clots and he was just plain wore out. You were a great friend and employer to him, and that was of upmost importance, because he felt loved. 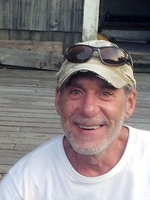 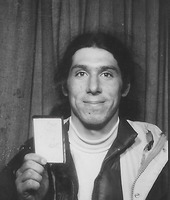