To share your memory on the wall of Maureen Dougherty, sign in using one of the following options:

Provide comfort for the family of Maureen Dougherty with a meaningful gesture of sympathy.

She was born on February 6, 1949 in South Bend, Indiana, to the late Eleanor Laux Sullivan and the late Robert E. Sullivan. She lived several years in Niles, Michigan before moving to Montana with her family at the age of five. She attended St. Anthony’s grade school and Sacred Heart Academy in Missoula and started at the University of Montana with a major in Voice. She transferred to Carroll College in Helena for a semester after the death of her brother David to be close to her sisters. She transferred back to the University of Montana in Missoula and graduated with a Bachelor of Arts degree in English. She discovered her true calling and later pursued a career in the medical field as a Radiology Technician. She worked both in Spokane, Washington and Missoula, Montana. She was honored to work as a Lead CT Technologist at St. Patrick's Hospital with excellent physicians whom she held in high regard for 40 years until she retired in 2016.

Maureen was a faith filled woman with a passion for singing. Following her lifelong passion for music she was a cantor at St. Francis Xavier Catholic Church for many years. She felt it was her calling to sing in church and considered her singing as a prayer to God with the congregation. Her St. Francis family was vitally important to her, including the musicians. Maureen was also a talented craftswoman creating masterpieces in knitting, needlepoint, and crewel. She recently completed a class on crochet and crocheted her own hat. She was an accomplished cook and enjoyed spending time in the kitchen making special meals with and for her children. Maureen was also an avid canner. Some of her favorites to make and share with others were pickles, apple butter, and Tom’s Salsa.

The most important thing to Maureen was time spent with her family. Her dedication to her family and her friends was unparalleled. She never missed a sporting event or any other important event for her children or nieces and nephews. Family togetherness, whether traveling or hosting at holidays, brought her joy beyond measure. Between coffee with her sisters and lunch with friends, Maureen made sure to live life vibrantly. On March 14th, 2014 Maureen was blessed with the role of Grandma to Conor Dougherty. She spent her retirement enjoying the youthful, creative, and exciting world through a child’s eye. From forts to imaginary worlds, she was up for anything and embraced Conors’ vivid imagination.

Maureen is preceded in death by her older brother, David Sullivan, and her parents, Robert and Eleanor Sullivan. She is survived by her son, Jamey Dougherty; son Sean and wife Anna Dougherty, and the light of her life, grandson Conor; daughter, Eleanor Dougherty; and daughter Mary Jane and husband Michael Crader; sisters and brothers in law, Sheila and Jim Merkel, Mickey Flores, Kitty Sullivan, Bridget and Dan McGregor, Shannon and Dan Anderson, and Kerry and Dave Lechner; and many nieces and nephews who loved her dearly. Maureen also leaves behind her beloved sheltie dogs, Sully and Scotty, who brought so much joy and happiness to her life. Maureen believed there was never too much family or too many dogs at a family celebration. The more the merrier!

Friends and family are welcome to attend the vigil service on Thursday, April 11 at 7:00 p.m. at St. Francis Xavier, 420 Pine Street, Missoula. A funeral mass will take place, officiated by Joseph Carver SJ, on Friday, April 12 at 10:30 a.m. also at Saint Francis Xavier with a reception immediately following at the church. In celebration of her life the family requests that you please wear something green (Maureen’s favorite color) to the service.

To send flowers to the family or plant a tree in memory of Maureen Patricia Dougherty, please visit our Heartfelt Sympathies Store.

Receive notifications about information and event scheduling for Maureen

We encourage you to share your most beloved memories of Maureen here, so that the family and other loved ones can always see it. You can upload cherished photographs, or share your favorite stories, and can even comment on those shared by others. 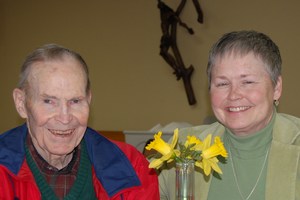