To share your memory on the wall of Moonyean Schneider, sign in using one of the following options:

Print
Moonyean M. Schneider passed away on June 9th 2019. She has joined her husband Dick at the Western Montana State Veterans Cemetery.

Moonyean was born September 4, 1928 in Estherville, Iowa to Anna Petersen Lundervold and Magnus Lundervold. Moonyean graduated from Estherville High in 1946.

Dick was a Navy World War II veteran and his ship was one of the first to arrive at Pearl Harbor after the infamous attack and engaged in rescue and cleanup operations.

Moonyean and Dick moved to Montana in 1950. Dick was a supervisor for Mountain Bell Telephone Company until his retirement. Dick passed away January 21, 2004.

Moonyean experienced the difficult times of the Great Depression and those memories carried with her to the very end. She dearly loved and missed her beloved Dick. Their love for each other was an inspiration for everyone.

Moonyean will be especially missed by Michel and Jim Salisbury, friends and neighbor of Moonyean and Dick for over 35 years.

Moonyean made great Lefse and other Norwegian holiday treats along with cookies all year long. She loved to crochet and has won a number of awards. She will be missed by all.

A Celebration of Life will be held at Garden City Funeral Home on Thursday, August 1 at 3:00 pm. The family suggests memorials be made to www.helpinghandsrescue.org in Lewiston, ID or any other animal rescue.
Read Less

To send flowers to the family or plant a tree in memory of Moonyean M. Schneider, please visit our Heartfelt Sympathies Store.

Receive notifications about information and event scheduling for Moonyean

We encourage you to share your most beloved memories of Moonyean here, so that the family and other loved ones can always see it. You can upload cherished photographs, or share your favorite stories, and can even comment on those shared by others.

Greatgrandkids! sent flowers to the family of Moonyean M. Schneider.
Show you care by sending flowers

Posted Jul 31, 2019 at 12:08pm
Rest In Peace grandma !! From all your grandkids and great grandkids! Love always and forever!

Great memories as neighbors on that section of Blaine Street close to Eddy's Bakery. We enjoyed knowing your mom, dad and both of you during those years. As time went on, our family moved to the new "Treasue State" section of town and I remember that your family moved as well. Our sympathies to you and your extended family.
Comment Share
Share via: 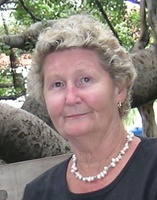