To share your memory on the wall of Myrna Chaney, sign in using one of the following options:

Myrna was born April 6, 1940 in Boise, Idaho, to Glenva (Downer) and Nelson Eyerly. She had to grow up unexpectedly fast when her father died in 1950 and she helped raise her two sisters, Linda and Cheryle, and her brother Kim.

She graduated from Park County High School in 1958 and moved to Missoula to attend (then-called) Montana State University. There, she joined the Kappa Kappa Gamma sorority, where she made many lifelong friends. Myrna graduated in the top-10 of her class of 1962.

Stanford University accepted her for graduate studies, and Myrna received her master’s degree in speech pathology and audiology in 1963. Within weeks of graduation, she married fellow Stanford student Robert Chaney on June 15, 1963. The couple had met through the audiology program in Missoula and returned there in 1964, shortly after the birth of their first child, R.B. and the start of her husband’s professorship at the now-named University of Montana.

Myrna began a career as a speech therapist soon after, first as a traveling clinician to elementary schools across the state and eventually as the resident therapist at Frenchtown Elementary School District. She helped thousands of children master their l’s and r’s and s’s as well as the challenges of feeling self-assured when others insist on pointing out differences.


She also became deeply involved in the parish life of Holy Spirit Episcopal Church. Starting with the church choir, Myrna found time to teach Sunday school and confirmation classes, train acolytes, and arrange flowers and decorations for the altar and any other church occasions.

Passion for ministry inspired Myrna to push the Episcopal Bishop of Montana to open a school for deacons in 1987. Bishop C.I. Jones ordained her as an Episcopal deacon in 1999. Myrna went on to develop the curriculum and eventually became Dean of the School of Deacons in 2006. She studied at Oxford University’s Summer School of Religious Studies, meeting scholars such as Rowan Williams shortly before he became Archbishop of Canterbury.

Her personal life could be defined in three words: Food, children and flowers. Myrna was such a fixture at Bitterroot Floral she had her own key to the back door, where she designed everything from wedding corsages to altar centerpieces. She had a sense not only for color but style of arrangement, often reflecting the personality of the bride or guest of honor.

Any child entering Myrna’s home would find secret nooks filled with books, toys, and treats (usually not allowed at home). She nurtured young women personally and professionally, through organizations such as P.E.O. She also sewed for them, from first baby clothes and doll outfits to Halloween costumes and wedding dresses.


And food. Any occasion was worth commemorating with a meal that would leave lasting memories for taste, presentation, novelty and devotion to craft. Myrna particularly liked cooking for groups, and had a dining room table with five leaves. Place cards, party favors, candles, printed menus, sculpted napkins, and themed activities accompanied courses chosen with the best ingredients and the guests’ favorites in mind. Myrna often offered to cook meals as a premium for the MTPR annual fund drive and other occasions. They typically brought in the top bid of the event.

In a blow of Jobian irony, Myrna was afflicted toward the end of her life with progressive apraxia. This rare neurological condition slowly destroyed her ability to speak and then write, although it never affected her ability to listen or read. But it never caused physical pain, and in the end her passage was peaceful.

In this time of pandemic precaution, a private Service for the Dead with the Rev. Terri Grotzinger presiding will be recorded for sharing. A more fitting memorial, with flowers, food, friends and single-malt scotch, will be announced as soon as practical and safe. Cremains will be interred at Holy Spirit Episcopal Church’s columbarium and on a favorite mountainside.

A recording of the service can be viewed on this website. Please click on the Photos & Videos tab on the menu and click Tribute Video.
Read Less

To send flowers to the family or plant a tree in memory of Myrna Faye Chaney, please visit our Heartfelt Sympathies Store.

Receive notifications about information and event scheduling for Myrna

There are no events scheduled. You can still show your support by sending flowers directly to the family, or planting a memorial tree in memory of Myrna Faye Chaney.
Visit the Heartfelt Sympathies Store

We encourage you to share your most beloved memories of Myrna here, so that the family and other loved ones can always see it. You can upload cherished photographs, or share your favorite stories, and can even comment on those shared by others. 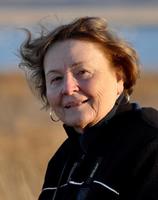