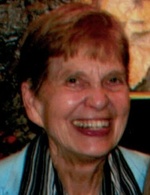 Neva Frances McRae, 85, of Missoula, passed away peacefully on Thursday, Sept. 26, 2019, at home of complications from dementia and with family at her bedside.
She was born on June 1, 1934, in Great Falls, to Roy and Frances Maurer as the third of four sisters who grew up on an irrigated farm on the Fairfield bench just east of Fairfield.
Her family raised sugar beets during the war and therefore they received extra sugar rations, so as a young girl Neva had fond memories of her family hosting taffy pulls with the neighbor kids. While in high school in Fairfield, she played clarinet in the band, acted in the senior play and served as the art editor for the yearbook. After graduation from high school, Neva followed her oldest sister to San Francisco where Neva attended a dental nurse assistant school.
She worked as a dental assistant in San Francisco for a few years before moving to Seattle to continue that line of work. While in Seattle, through mutual eastern Montana friends, she met George McRae from Montana who was doing graduate studies in mathematics at the University of Washington. On June 15, 1963, she married George in Seattle. She continued to work for an oral surgeon until their daughter Loreen was born in 1966 in Seattle. The next year they moved to Illinois, where their son Scott was born in 1968. Ultimately they moved back home to Montana in 1970 to establish their place up Miller Creek, south of Missoula. In addition to all the hard work and enjoyment of establishing the Miller Creek place she also found the time and energy to work outside the home as a mail teller at the local bank. In 1976-7, the family lived in Stone Mountain, Georgia, while George did a faculty exchange at Georgia Tech in Atlanta.
A loving and caring wife, mother and grandmother, she always had a beautiful smile and a sweet and giving heart for her family and friends. She always really enjoyed her bountiful garden and fruit trees.
Survivors include her husband, George, Missoula; her daughter and family, Loreen (Mark) Skinner, Missoula; her son and family, Scott (Kristy), Helena; her sisters, Madelon Nelsen, Betty Tift, Camano Island, WA; her brother and sisters in-law, Bruce (Jackie) McRae, Athens, GA, Jackcee Anderson, Missoula, along with 5 grand children.
Neva’s family would like to give a special thank you to Dr. Michael Caldwell, Home Instead, and Partners in Home Care Hospice for all the loving care you gave our sweet Neva.
A Celebration of Life is planned on Friday, Nov. 22, 2019, at Garden City Funeral Home (1705 W. Broadway in Missoula) at 11 a.m. A reception will follow at the funeral home.
In lieu of flowers, donations can be made in Neva’s honor to a charity of your choice. Following Neva’s wishes her body has been donated to science and after cremation the remains will be returned to the family.