To share your memory on the wall of Nicholas Obresley , sign in using one of the following options:

Provide comfort for the family of Nicholas Obresley with a meaningful gesture of sympathy.

Print
Nicholas Charles Obresley, 76 of Missoula, passed away Sunday Morning, September 8 2019 at St. Patrick Hospital with his family by his side.

He was born March 19, 1943 at Deaconess Hospital in Great Falls MT to Gladys M. Foss and Joseph... Read More
Nicholas Charles Obresley, 76 of Missoula, passed away Sunday Morning, September 8 2019 at St. Patrick Hospital with his family by his side.

He was born March 19, 1943 at Deaconess Hospital in Great Falls MT to Gladys M. Foss and Joseph N. Obresley. As a young man he lived with his family on the Missouri river in Cascade MT. He attended Paris Gibson Middle School and went on to graduate from Great Falls High in 1960. Soon after High school he enlisted in the US Navy where he served his country in Vietnam as a member of the Amphibious Force on the USS Eldorado. He received medals for combat including an armed forces expeditionary medal.

Later in life you could find him tending bar at different establishments throughout Montana. As the son of a prominent bar owner in Great Falls he picked up the trade as a young man. He had a true love for people and would gladly listen to your problems never mentioning his own. After retirement, he relocated to Missoula to be closer to his children and grandchildren. He loved taking them on rides in his classic cars or his convertible thunderbird. Nothing made him happier than seeing them smile. He was a great friend, father and grandfather.

He is preceded in death by his Mother and Father, Gladys and Joseph Obresley and his two brothers David and Gerald. He is survived by his four sons Joseph, Jason, Jeffrey, Jerad and his daughter Janese and their spouses as well as multiple grandchildren, nieces and nephews and numerous people that were touched by his life.

We encourage you to share your most beloved memories of Nicholas here, so that the family and other loved ones can always see it. You can upload cherished photographs, or share your favorite stories, and can even comment on those shared by others. 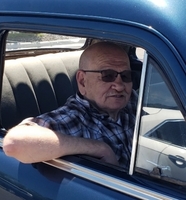