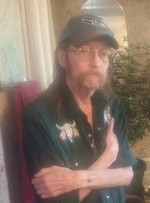 A storyteller, story maker, beloved son, wondered-about brother, honored father...that was Pat! (Thomas) Patrick Reynolds was born to Tom and Bobbie Reynolds in Billings, Montana, July 2, 1955. He was taken from us way too early by lung cancer on October 20, 2019 in Missoula, Montana.
He showed an interest in cars at an early age...a story Mom tells includes his toy truck, peanut butter on its tires and her light gray sofa! Usually, his vehicular adventures involved dismantling and plenty of greasy parts all over the yard. He worked at several different car parts places during the early days. His son Stephan recalled how Pat was always willing to help the boys with their cars, and so proud that they counted on him.
Pat had many friends but only a few really close buddies, and they stayed good friends throughout his life. When they weren't getting into mischief like blowing up bridges, setting the rims on fire or racing wheel chairs down Pioneer Park hill, they were busy honing their musical talents...listening to our brothers play guitars for hours on end was heavenly...gifted in so many ways!
Pat graduated from Senior High in Billings in 1974 and wore many hats during his working days. Some of these include MT. forest fire fighter, owning the Tea Pot Cafe in White Fish, MT, and warehouse manager for Car Quest in West Yellowstone to name a few...but being a father was both the most difficult and most rewarding career of all. He was blessed with two sons, Stephan and Shiloh, as well as three step-children, Sheri, Shane, and Scott from his marriage to Gloria Luckinbill...they were later separated but he always called all the kids HIS! His other love, being a Montanan, served him well as far as rustic furniture building, hunting, fishing and just living the life...he shared these treasures with his children, teaching them the values of independence, respect, and self-reliance.
He is preceded in death by both Reynolds and Verhasselt Grandparents, an aunt and an uncle, his brother Randy, and his dad by only five weeks. He leaves behind his mom, Bobbie, sons Stephan and Shiloh Reynolds, daughter Sheri Wilson, sons Shain and Scott Chamberlain, brother Rick (Janet) Reynolds, sisters Vonni Casey, Linda (Steve) Biondich, Julie (David) Cattnach, Lora (Shawn) Hirsch, nieces, nephews, grandchildren, aunts and uncles, and friends that are more like family. A very special thank you to our “other brother” for his devotion to and help with Pat, Joe (Becky) Schwartz...we couldn't have done it without you!
Throughout his life, Pat practiced what he learned from Dad...he did it his way. As lovingly said by his son, Shiloh, “He was a tough S. O. B. with a heart of gold.” Cremation has taken place at Garden City Funeral Home in Missoula, Mt. and no services are planned at this time.