To share your memory on the wall of Ralph Reimann, sign in using one of the following options:

Provide comfort for the family of Ralph Reimann with a meaningful gesture of sympathy.

On March 11, 1956 he married Lois Anfinson in Velva, ND. Together they had 5 children. After 19 years they divorced, and remained friends.

Throughout his career as a truck driver he had either picked up or delivered in each of the lower 48 states. At the time of his retirement he was an owner/operator.

Ralph was a member of the Missoula Eagles Lodge, and the VFW of Redding, CA. He enjoyed sunshine, travel, baking and gardening. He was also an avid reader.

Ralph was a quick witted man and easily made friends. He was generous and in the winter months he cleared snow off his neighbor’s cars for them.

In his final weeks Ralph was honored by having his picture placed on the wall at Charlie B’s.

Service will be held at Garden City Funeral Home on Thursday, June 13 2019 at 1pm with a reception to follow at the Eagles Lodge.
Read Less

We encourage you to share your most beloved memories of Ralph here, so that the family and other loved ones can always see it. You can upload cherished photographs, or share your favorite stories, and can even comment on those shared by others.

Posted Jun 25, 2019 at 10:17am
I am so sorry for your loss. Please take comfort in John 5:28, 29 and 1 Corinthians 15:26, where God promises that we will be reunited with our loved ones here on earth in the near future and will never have to fear losing them again.

Flowers were purchased for the family of Ralph Reimann. Send Flowers

Blooming Garden Basket was purchased for the family of Ralph Reimann. Send Flowers

Flowers were purchased for the family of Ralph Reimann. Send Flowers 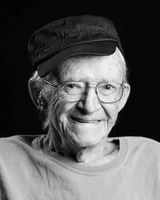