To share your memory on the wall of Robert Laughlin, sign in using one of the following options:

Print
Bob Laughlin, a resident of Missoula, MT for 12 years, passed away at the age of 76 on February 3, 2020 at The Springs, surrounded by his loving family. Bob was born in Riverside, California in 1943.

Bob married Terry Conant in 1962 in R... Read More
Bob Laughlin, a resident of Missoula, MT for 12 years, passed away at the age of 76 on February 3, 2020 at The Springs, surrounded by his loving family. Bob was born in Riverside, California in 1943.

Bob married Terry Conant in 1962 in Riverside, CA. They moved to Alaska in 1968 where they made their home for 30 years. Together, they managed Tangle Lakes hunting & fishing lodge on the Denali Hwy for several years before moving to Anchorage where Bob had a career at Sears as a retail manager.

Bob & Terry retired in 1993 and traveled the country for five years. They settled down for a short time in Roseburg, OR and Yuma, AZ before moving to Vancouver, WA in 2003. Terry passed away in 2006.

Bob was a lifelong outdoorsman and loved to take his kids out exploring in Alaska. It is difficult to say goodbye to a wonderful husband, father, brother and friend.

Bob is survived by his wife Sandy of 12 years, and three children, Rob of Palmer, AK, Mike of Atlanta, GA, and Cheryl of Portland, OR. He has eight grandchildren, Bradley, Rachel, Samantha, Sarah, Barrett, Abby, Christopher and Gabriel. He is also survived by his two brothers, Johnny of Riverside, CA and Dan of Redding, CA.
Read Less

There are no events scheduled. You can still show your support by sending flowers directly to the family, or planting a memorial tree in memory of Robert "Bob" Laughlin.
Plant a Tree

Flowers were purchased for the family of Robert Laughlin. 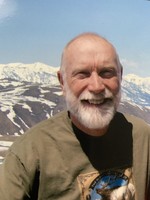