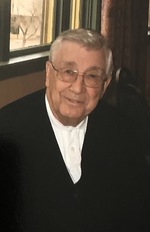 On October 29, 2020, long-time Missoula resident Roger Wesley Helms passed away at the age of 85. Roger was preceded in death by his beloved wife, Kaye Carter Helms; his parents, Hubert and Racheal Helms; daughter-in-law, Mary Frances Brown Carter; and several aunts, uncles and cousins.

Born in Eureka, MT on December 4, 1934, Roger graduated from Gonzaga University in 1957 with a degree in Business Management, and started his professional career with the US Forest Service shortly thereafter. Raising in ranks from administrative trainee on the Flathead National Forest to his final position as Assistant Regional Budget Officer, Roger’s career involved stints in Great Falls, MT; Grangeville, ID; Helena, MT and the Gallatin National Forest in Bozeman, MT. Roger was reassigned to a newly implemented manpower program branch in the Missoula Regional Office in September, 1977; where he remained until retirement on December 30, 1989, after 33 years of federal service.

After many years of bachelorhood, Roger married Kaye Carter at Holy Rosary Catholic Church on September 1, 1979. They were an inseparable couple until terminated by Kaye’s death on March 26, 2015. Roger was so pleased and proud to be accepted as a prominent and important part of Kaye’s large family, particularly her son’s – Richard Lee Carter of Bozeman, MT and Colorado Springs, CO.

Roger had a lifelong interest in sports that never waned. Rarely did a day pass that a game of some sort was not viewed on the television. Roger also spent many enjoyable hours on the Bozeman Riverside and Missoula Country Club golf courses, until health issues terminated that sometimes frustrating, but always fun, hobby.

Roger is survived by his stepson, and best friend, Richard Carter; 3 granddaughters – Nancy Beattie, Julie Cohen, and Ann-Marie Estes, 6 great- grandchildren, 6 great-great grandchildren, 2 first cousins, and a number of second and third cousins. He was greatly loved and admired by all.

Funeral Arrangements are under the direction of Garden City Funeral Home. Recitation of the Rosary will be held at the funeral home on Wednesday Nov 4, 2020 at 6:00 PM. The Mass of Christian Burial will take place on Nov 5, 2020 at 10:30 am at St. Francis Xavier Catholic Church, Missoula Montana. Interment will take place at the Tobacco Valley Cemetery in Eureka, Mt on Friday Nov 6, 2020, where Roger will rest eternally with all of the people he loved most.

The family requests that donations in Roger’s memory be made to Partners in Home Care of Missoula.