To share your memory on the wall of Shirley Colyer, sign in using one of the following options:

Provide comfort for the family of Shirley Colyer with a meaningful gesture of sympathy.

Shirley was born Jan. 2, 1935, in Dodson to Alfred and Gertrude Oberst. As a young girl, she lived in various locations in Phillips County, including Zortman and Malta, where her father worked in the mines supporting the WWII war effort. The family later moved to Lincoln, and then to Plains when Shirley was 9. She received her education at local schools until her eighth-grade year when she and her younger siblings traveled to boarding school in Missoula to attend Sacred Heart Academy. Missing home, the kids returned to school in Plains the following year.

In 1950, when Shirley was 15, her mother passed away during childbirth. This proved to be a defining moment in Shirley’s life. As the eldest child, she became caregiver to her infant sister and three other siblings, and helped her father run the household.

Shirley fell in love with a handsome red-headed character named Pat Colyer. They married in 1952 following her graduation from Plains High School, and soon started what was to become a rapidly growing family. Pat was employed by the Northern Pacific Railroad for several years, then took a job with what was then Hoerner Waldorf Paper Company, moving the family to Missoula. Shirley birthed and raised babies, stretched the money, made pies, sewed clothes, volunteered at the kids’ schools, made sure the boys did their paper routes, attended countless school activities and athletic events, and kept all the balls in the air. Simply put, raising 11 children was hard, but Shirley had a fierce work ethic, and raised her children in a similar vein. She was practical, frugal and always in motion. She also loved to laugh, and was thoroughly entertained by her bunch.

Shirley would have undoubtedly attributed her strength to her upbringing and strong Catholic faith. She and Pat were parishioners at St. Francis Xavier Church in Missoula throughout their adult lives, and generous supporters of Missoula Catholic Schools. In 2017, Shirley was honored during the church’s 125th anniversary celebration as the Parish Matriarch for her volunteerism and many years of supporting the church and its members. Shirley’s faith also benefited her children, as they called on her when in need of a minor miracle, because, “Mom has a direct line to God.”

In 1991, Pat and Shirley, purchased a cabin on Big Arm Bay at Flathead Lake. The cabin instantly became a hub of summer activity for the family, as everyone was welcome at all times. The grandchildren especially have fond memories of water play, fishing, s’mores, Grandma’s waffles for breakfast and Grandpa throwing “a little gas” on the fire. Shirley cherished her time at Flathead, both when the family was together, and after Pat’s passing when she was able to spend peaceful time there reading and quilting.

Shirley had many friends, too numerous to name. Whether friend or family, if you were in the life of this remarkable woman you were richer for it, and lucky indeed. For many years, she arose at 5 a.m. to walk with her Rattlesnake Valley neighbors. She was a member of P.E.O., a philanthropic organization for the education and advancement of women; the Missoula Quilt Guild; and other quilting groups.

Shirley was preceded in death by her husband of 59 years, Pat; her parents and an infant brother; her daughter Marella; infant granddaughter Michaela; sister Audrey Larson and sister-in-law Kathy Oberst.

She is survived by her brother Fritz Oberst and his wife Bobbi; brother George Oberst; sister Mary Beth and her husband Jan Hulquist; brother-in-law David Larson; and her nieces and nephews.

A memorial Mass will be held Saturday, Nov. 2 at 10:30 a.m. at St. Francis Xavier Church, 420 West Pine St., Missoula. A reception in the church basement will follow the service.

Memorials may be made in Shirley’s name to the St. Francis Xavier stained glass window restoration project, Missoula Catholic Schools, or the charity of one’s choice.
Read Less

We encourage you to share your most beloved memories of Shirley here, so that the family and other loved ones can always see it. You can upload cherished photographs, or share your favorite stories, and can even comment on those shared by others.

Bryan and Patricia Morrison, Chris, Marjorie, Cameron and Emma Carter, and others have sent flowers to the family of Shirley Oberst Colyer.
Show you care by sending flowers

Posted Nov 01, 2019 at 03:30pm
Our sincere condolences to the entire Colyer family. Shirley was a dear, dear woman, with a loving family. She will be in our constant prayers.

Posted Oct 31, 2019 at 11:35pm
Colyer and Oberst family: with love and deepest sympathies. She was a light to all who crossed her path. Eternal rest. Love, Megan & Molly Harrington

Flowers were purchased for the family of Shirley Colyer. Send Flowers

Posted Oct 31, 2019 at 11:13pm
Heartfelt condolences , love and prayers to all of the family. Shirley was a wonderful wife, mother, sister, aunt, and Christian.

Flowers were purchased for the family of Shirley Colyer. Send Flowers 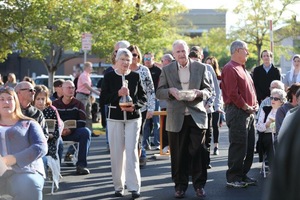