To share your memory on the wall of Shirley Maloney, sign in using one of the following options:

Print
MISSOULA ~ On September 24, 2020, the angels came an escorted Shirley to be with her Lord where she was greeted by her husband and mother.

Shirley was born on March 31, 1936 to Charles and Frances Adamaitis in Chicago, Illinois. She was... Read More
MISSOULA ~ On September 24, 2020, the angels came an escorted Shirley to be with her Lord where she was greeted by her husband and mother.

Shirley was born on March 31, 1936 to Charles and Frances Adamaitis in Chicago, Illinois. She was originally named Charlene but the nurse at the hospital did not hear the name correctly and this is how Shirley got her legal name. Shirley grew up in Chicago all her childhood years. Her mother divorced her father and remarried to a man by the name of Johnny Damptz with whom Shirley saw as her father.
Shirley attended a Catholic Middle and High School in Chicago. From there, Shirley attended college at St. Francis College in Jolliet, Illinois and earned a degree in Journalism. During this time, she conducted an interview for a friend and this is when she met Owen Maloney, a substitute for the person that Shirley was to interview. They were destined to meet despite any odds. Shirley and Owen married on October 25, 1958. Shirley and Owen moved to several states until settling down in Bel Air, Maryland and raised two children. While in Maryland, Shirley attended Townsend State University where she earned a second degree in Accounting. In 1985, the family officially relocated to Missoula, Montana where Shirley lived until her passing. Shirley went on to work for H&R Block for 40+ years before retiring.

Shirley is preceded in death by her husband (Owen), mother, stepfather, brother (John) and sisters in laws (Mary Margaret and Kay), niece (Jayne), and nephews (Van and Sean). She is survived by her children Sheila (Sean) Finley and Michael Maloney (AnnMarie Riemann); grandsons Sean Dugdale and Dylan Maloney; step grandchildren Jessica (Ryan) Schumacher, Cody (Staci) Finley, Tucker Finley; step great grandchildren David Finley, Charlotte Finley, and Henry Finley who all called her “Gigi.” Shirley treated her blended family as her own and never accepted the word “step” when it came to any of the grandchildren or great grandchildren.

A graveside service is planned for 11 a.m. Friday, October 23, 2020, during their anniversary weekend, at Western Montana State Veterans Cemetery in Missoula with family and close friends. Arrangements are under the care of Garden City Funeral Home in Missoula.

We would like to thank Partners in Home Care’s Home Health Care and Hospice Programs. Without their assistance, mom would not have been able to remain at home during her last days. We would especially like to thank Andrea, mom’s bath aide, as mom adored her.

In lieu of flowers, please consider make a donation to the Hospice Program at Partners in Home Care in mom’s name.
Read Less

To send flowers to the family or plant a tree in memory of Shirley Frances Maloney, please visit our Heartfelt Sympathies Store.

Receive notifications about information and event scheduling for Shirley

There are no events scheduled. You can still show your support by sending flowers directly to the family, or planting a memorial tree in memory of Shirley Frances Maloney.
Visit the Heartfelt Sympathies Store

We encourage you to share your most beloved memories of Shirley here, so that the family and other loved ones can always see it. You can upload cherished photographs, or share your favorite stories, and can even comment on those shared by others. 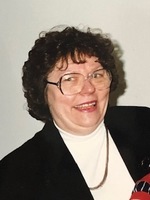