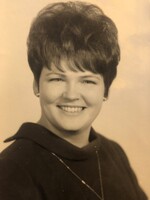 Sparky was born to Edna Marion Anderson Selle and Columbus Moore in Clarks Fork, Idaho. Her mom moved the family to Missoula Montana when she was in grade school and she called Montana home after that. She went to Cosmetology school and met lifelong friends.

Sparky married, had two children, and lived in Greenough, Montana for over 20 years. She was active in the community, church, and supporting her family and friends in whatever ways needed. Once Hank married and settled in Stevensville, Montana, she moved there to be closer to grandkids. She lived in Stevensville for the last 18 years.

Sparky loved God and her goal was to find ways to serve others. She loved being a mom. She always said that every age was her favourite. Being with her children, grandchildren, and those she adopted as hers along the way brought her the most joy.

Gardening, swimming, baking, yard work, family history and animals were all things she loved. She always got up early as there was always something to be done. Sitting still and wasting time was not something she did well.

Sparky truly loved people. She had a gift of friends and really loved them for who they are. She showed her love by being there for people and when she could not, she would send cards or packages.

Her devotion to her family and belief in God supported her through her life. She would always say, “I will go and do whatever God wants me to.” Those were not just words to her but how she lived her life.

Her last few conversations with her grandkids were spent talking about memories they made with her. Sparky was all about making memories and wanted to make sure they would pass those on to their families. They laughed and talked about their cooking days, board games, her rubbing their feet, laughing, and how they were not allowed to fight with each other in her house. How she went to as many of their games as she could. Making sure her grandkids were kind, strong and there for each other was so important to her. She did the same for her own kids. As they were talking a story was mentioned. Hank came to pick them up and they were baking cookies and other things for gift baskets. They were not finished. Hank sat down and said he would wait. That he remembered doing the same thing with her when he was a kid. She left a legacy of love that will be passed down.

In addition to her parents, she was preceded in death by her son, Hank Praast.

Sparky is survived by her daughter, Lucy (Randy) Anderson; her daughter-in-law, Jaime Praast; granddaughters, Kennedy Praast and Cambree Praast; grandchildren, Maliyah LeCoure, Bryson LeCoure, and Kellen LeCoure; Her siblings, Lola (Don) Zeth, Donna (Steve) Dightman, Jim (Jessica) Selle, Judy Johnson, and Larry (Kathy Selle). Many nieces and nephews. She also collected so many others as a part of her family.

The funeral service will be at 11:00 a.m., on Wednesday, March 10, 2021, at the Church of Jesus Christ of Latter-Day Saints, Stevensville. Burial will follow in Riverside Cemetery under the care of Garden City funeral Home of Missoula.