To share your memory on the wall of Stavroula Petrou, sign in using one of the following options:

Print
Stavroula (Voula) Petrou, 93, of Missoula, passed away on Tuesday, January 21, 2020, in her home surrounded by family, of natural causes.

She was born on August 4th, 1926, in Petalidi, Greece to George and Kostadena Demonakos, she was th... Read More
Stavroula (Voula) Petrou, 93, of Missoula, passed away on Tuesday, January 21, 2020, in her home surrounded by family, of natural causes.

She was born on August 4th, 1926, in Petalidi, Greece to George and Kostadena Demonakos, she was the 2nd oldest of 8 kids. She lived there up to the age of 13, then moved to Athens, Greece to be with her aunt. She met her husband, Demetrios( Jim) Petrou at the age of 18. They were married on June 19th, 1949. They resided in Athens, Greece where her husband worked as a plumber until 1956, when he immigrated to the United States. He then was able to bring Voula and his 2 daughters to Missoula in 1959.

There her husband bought the Missoula shoe repair in 1962 and ran it until 1979. The following year Voula and her husband purchased the Greek Pastry Shop, which continues to be operated by the family.

She enjoyed gardening and cooking. She was and active member of the Annunciation Greek Orthodox Church. She was a loving wife, mother, grandmother and great-grandmother who took great loving care of her family, friends and church.

She is survived by her 3 daughters and their families: Maria Tskarestos, Missoula, Eva Itskos, Coeur D’ Alene, Dena Petrou, Seattle and one son: John Petrou, Missoula along with 10 grandchildren and 17 great- grandchildren. One brother: Nick Demonakos, Seattle.

A Trisagion Prayer service will be conducted at the Garden City Funeral Home on Sunday January 26th, 2020 at 6pm. Funeral services will be held on Monday, January 27th, 2020 at 10am at the Annunciation Greek Orthodox Church, 301 South 6th Street West, Missoula. Burial will follow in Missoula Cemetery.

The family would like to thank Dr. Akaash Acharya, the staff at Hospice of Missoula, Father Rob Spaliatsos and the staff at Garden City Funeral Home.

To send flowers to the family or plant a tree in memory of Stavroula "Voula" Petrou, please visit our Heartfelt Sympathies Store.

We encourage you to share your most beloved memories of Stavroula here, so that the family and other loved ones can always see it. You can upload cherished photographs, or share your favorite stories, and can even comment on those shared by others.

Ladies of the BSF Leaders Circle sent flowers to the family of Stavroula "Voula" Petrou.
Show you care by sending flowers

Ladies of the BSF Leaders Circle

Ladies of the BSF Leaders Circle purchased flowers for the family of Stavroula Petrou. Send Flowers 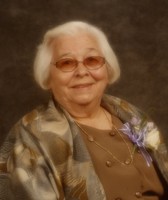