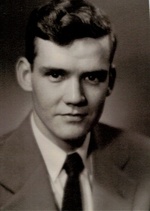 Tom was born in Ardmore, Oklahoma on July 7, 1926 to Forest T Tabor and Grace Kohler Tabor. When he was four the family moved to Prairie du Sac, Wisconsin.

He went to a one room school for his eight grades. His teacher was his Aunt Byrd. He went to Prairie high and graduated in 1944. He was drafted in the Army and spent time in the Philippines. After he was honorably discharged from the Army, he graduated from the University of Wisconsin with a law degree in 1951.

He married Rose Pings on September 6, 1950. With a wife and a small child, he got a job with Iowa National Mutual as a claims adjuster. He was transferred to Billings, Montana in 1955. Tom moved his family to Missoula in 1957 where he worked for John R. Cook for 20 years and later for State Farm for 16 years. He retired in 1988.
Tom and Rose would have celebrated 69 years of marriage this September.

Tom and Rose have five children, Nathan (Darlene), Laura (Kent), Ann (Tim), Tom and Chris. They have 10 grandkids and 12 great grandkids. He is survived by his brother Bob, and preceded in death by his parents and sister, Louise.

He was a wonderful husband, father and grandfather. We miss you very much!