To share your memory on the wall of William \"Bill\" Derrick, sign in using one of the following options:

Print
William Richard Derrick, PhD, 82, of Missoula, passed away peacefully on Thursday, October 8, 2020 in his home with his daughter Deborah at his side. He had been under hospice care for several weeks.

Bill was born on May 18, 1938 in Okl... Read More
William Richard Derrick, PhD, 82, of Missoula, passed away peacefully on Thursday, October 8, 2020 in his home with his daughter Deborah at his side. He had been under hospice care for several weeks.

Bill was born on May 18, 1938 in Oklahoma City, Oklahoma to Marvin A. and Mary C. Derrick. His father worked for the State Department and was assigned abroad for most of Bill’s early life. The family spent his first year in Finland, during the Russian embargo.

Bill spoke English and Spanish fluently along with a little French, lived in many countries and traveled to even more. He grew up in Mexico, and Ecuador, being cared for by his mother, grandmother, and father. He has two sisters, Nancy and Jane, who were born at the end of WWII.

After finishing High School at age 16 in Ecuador, Bill went on to undergraduate studies at Oklahoma State University, majoring in mathematics, where he met the love of his life, Judith Kay Long. In 1958 he became commissioned in the US Army in the Quartermaster Corps, and taught Mathematics at Fort Lee, Virginia. Judith and Bill married in The First United Methodist Church of Stillwater, Oklahoma, February 1960.

Bill spent several years working with International Business Machines (IBM) in Endicott, New York, then on to Bloomington, Indiana where he completed his doctorate in Mathematics. During this time, Bill and Judith raised three children, Deborah, Suzanne, and Richard prior to moving to Salt Lake City, Utah.

1972 saw the family move to Missoula, Montana, where Bill became a full professor at the University of Montana specializing in Complex Analysis, Differential Equations and Mathematical Modeling. Bill was a prolific author with a multitude of articles published in the Rocky Mountain Journal (and others) as well as 10 mathematic textbooks. As a professor at UM, Bill served as Chairman of the Math Department for several years, was a Fulbright Scholar, received a National Science Foundation Grant to teach in South America, and traveled to Australia and Japan to lecture, teach and conduct research. He also conducted research at Lawrence Livermore National Laboratory in California. He won the teacher of the year award, and was active with undergraduate, graduate, and doctoral students at the University of Montana. He maintained many long-term friendships, acting as a mentor to his doctoral students as they progressed in their professional lives.

Bill was an active member of Holy Spirit Parish, in Missoula. He found pleasure in working as an Usher, attending several Cursillo’s throughout the years and being a part of the morning men’s group.

After retirement Bill remained active as a professor emeritus, continuing his research, and co-authoring many papers. Bill loved to travel, camp, was an avid philatelist, and exceptional bridge player.

Bill is predeceased by his parents (Marvin and Mary), his wife (Judith), his children (Suzanne and Paul) and grandchild (Griffin).
Bill is survived by his: Daughter, Deborah Gass of Missoula, Montana and her family: Tod (husband) and Talla (daughter); Son, Wm Richard Derrick of Boerne, Texas and his family: Deborah (wife), Kiya, Kailey, and Kirstie (daughters) Brandon (son-in-law) Evie, Alta, and Theodora (grandchildren); and Sisters: Nancy Denslow of Gainesville, Florida and her family: David (husband), Sandy and Sheri (daughters) and their families; and Jane Samsel of Gordonsville, Texas and her family: Allen (husband), Deanne, Robert, Jon, Laurina, Allee and Ryan (children) and their families.

Bill will be fondly remembered by his family for his amazing intellect, indomitable spirit, and irreverent sense of humor.
Read Less

To send flowers to the family or plant a tree in memory of William "Bill" Richard Derrick PhD, please visit our Heartfelt Sympathies Store.

Receive notifications about information and event scheduling for William "Bill"

There are no events scheduled. You can still show your support by sending flowers directly to the family, or planting a memorial tree in memory of William "Bill" Richard Derrick PhD.
Visit the Heartfelt Sympathies Store

We encourage you to share your most beloved memories of William "Bill" here, so that the family and other loved ones can always see it. You can upload cherished photographs, or share your favorite stories, and can even comment on those shared by others. 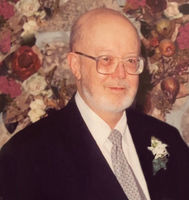