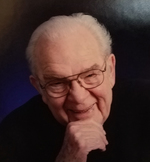 William ‘Bill’ Joseph Sweeney, 88, of Missoula, passed away peacefully on Friday, Nov. 8th, 2019 at home surrounded by family and loved ones.
Bill was born on Feb. 23rd, 1931 in Greeley, Nebraska to Dan and Betty Sweeney. Bill’s early years were spent on the family farm in Broken Bow, Nebraska with his three younger brothers: Tom, Gene and Jerry Sweeney. While in school in Broken Bow, Bill excelled in football and basketball. Soon after high school, the Sweeney family moved to Strasburg, CO and took over a large farm there where Bill and his brothers worked side by side with their father.
Bill was drafted into the army in 1950 and served valiantly in the Korean conflict. After serving his country, Bill returned to Colorado in 1953. It was soon thereafter that Bill met the love of his life Shirley June Floreth of Byers, CO. Bill and Shirley were married in Aurora on December 29th, 1956. Bill enrolled at Regis College in Denver, studying business administration in the evenings and began driving a fuel truck in the day for the Humble Oil Company. After graduating college, Bill stayed on with Humble Oil which eventually became Exxon.
Bill and Shirley were the proud parents of four children Timothy James, Kathleen Ann, Terrence Joseph, and Daniel Russell. Bill, Shirley and the kids made several moves as Bill advanced his career with Exxon. After leaving Colorado in 1965, the family headed for Billings, Montana. Career transfers took the family from Billings to Havre to Bismarck and eventually back to Billings where Bill was District Manager for Exxon until 1983. Bill took an early retirement and the family moved to Missoula where Bill began a second career as an owner/operator of truck stops and convenience stores.
Bill was active in the church and the community, especially the Sentinel Kiwanis, and supporting the Montana Grizzlies through the GSA. Bill and Shirley were great Griz fans! They were season ticket holders for many years.
One of the highlights for Bill and Shirley during the summer was spending time with family and friends at the family cabin at Swan Lake. This was one of Bill’s favorite places on earth.
Bill was a loving husband, father, Papa, and had many great friends. Anyone who ever met Bill, felt his warmth and compassion. So many people have said that once you met Bill, you fell in love with him. Bill had a huge circle of family and friends and was constantly on the phone with them seeing if they were doing all right. Bill had the best stories, the biggest heart, and the softest hands. He was such a caring man that will be dearly missed.
Survivors include his wife Shirley, Missoula; son Tim (Kris) Sweeney, Missoula; daughter Kathi (Doug) Kobs, Draper, UT; son Terry Sweeney, Bozeman; son Dan (Becky) Sweeney, Liberty Lake, WA; thirteen grandchildren; numerous nephews, nieces and cousins. Preceded in death by his parents Dan and Betty Sweeney, brothers Tom, Gene and Jerry. Upon Bill’s death, we are quite confident they were all reunited in heaven with quite an Irish celebration.
Visitation / Rosary will be held on Saturday Nov. 16th @ 5:30 PM at Garden City Funeral Home. Funeral Service and Mass will be held Monday Nov. 18th @ 11:00 AM at Christ the King Catholic Church. Lunch and reception following Mass at the church. Burial will follow at the Missoula Veterans Cemetery at 3:00 PM.