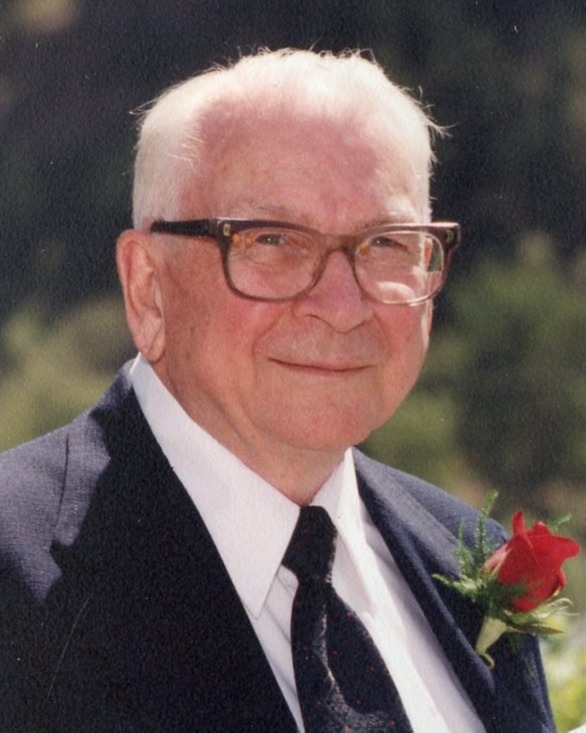 Mac was born February 20, 1927 in Canton, Kansas, to Joseph L. and Vesta E. McIntosh, the second of three children.  His childhood was spent in Wichita and Canton, and he graduated from Canton High School in 1944.

After graduating high school, Mac attended University of Wichita (now Wichita State), where he met his future wife, Reba Holloway, at a UW Homecoming dance. He enlisted in the Navy in 1944, and served 14 months as an electronic technicians mate and a 2nd class petty officer. While stationed in Chicago, he and Reba wrote each other every day. He even took a long weekend to visit her 700 miles away in Wichita, though he was only allowed to travel 500 miles. After his time in the Navy, he completed his degree at UW, was a member of the marching band, and graduated in May 1948.  He and Reba were married August 22, 1948 at First Baptist Church in Wichita.

Mac and Reba moved to Chicago in September 1948 so that he could enter University of Chicago medical school. He completed four years of training in Chicago, because he wanted to be as skilled as possible, graduating in 1952. They then moved to Minneapolis, MN for a surgical internship, followed by a neurosurgical residency completed in July 1957.  While in Minneapolis, he served in the National Guard, receiving a rank of Captain. Upon completion of his residency, Mac and Reba moved to Missoula on the recommendation of a fellow resident.  Mac began practicing neurosurgery in Missoula in 1957, founding the Missoula Neurosurgical Clinic.  After 25 years of practice in Missoula they moved to Nacogdoches, TX where he practiced four years before retirement in August 1986.  He liked being a doctor because, “they brought you in when you were needed, and you didn’t sit around all day.”  He was a skilled surgeon, and preferred working in the operating room versus seeing patients in the office.

In his free time, Mac enjoyed woodworking, and tinkering with tractors and motorcycles.  He liked to escape the hospital and spend his time at the family farm up 9 Mile with Reba and his four sons. Mac and Reba split their time between Missoula and Texas for over ten years, eventually moving back to Missoula full time. In retirement, he enjoyed playing cribbage with his grandchildren, and bridge with his friends at the Senior Center in Missoula.  He enjoyed life’s simple pleasures: watching football, classical music, and his terrible cat Miss Kitty.

Mac was preceded in death by his parents, brother Bill, sister Betty, wife Reba, and granddaughter Clara. He is survived by his sons David, Douglas (Jane), Jim (Maureen), and Richard, eight grandchildren, and seven great-grandchildren.

Services will be held at Garden City Funeral Home on December 28th, at 11am, followed by a reception.

To send flowers to the family in memory of Dr. James E. McIntosh, please visit our flower store.